FANUC America’s CRX-10iA and CRX-10iA/L (long arm version) collaborative robots are said provide ease of use, reliability and safety with parts weighing up to 10 kg. 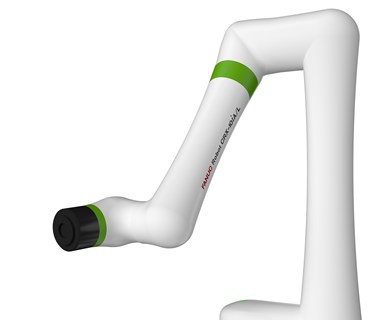 FANUC America’s CRX-10iA and CRX-10iA/L (long-arm version) collaborative robots are said provide ease of use, reliability and safety with parts weighing up to 10 kg. The CRX-10iA and CRX-10iA/L provide a reach of 1,249 mm and 1,418 mm, respectively. Sensitive contact detection enables them to work safely alongside people in a variety of industrial and manufacturing jobs, the company says.

According to FANUC, the cobots are easy enough to set up that someone with no experience using a robot can do so. The lightweight, compact arm is intended to fit a variety of floor configurations. The long-arm version uses a swing motion to access parts behind it.