Hurco’s double-column BX40Ui five-axis machining center is equipped with a trunnion table mounted along the Y axis for performance and flexibility. 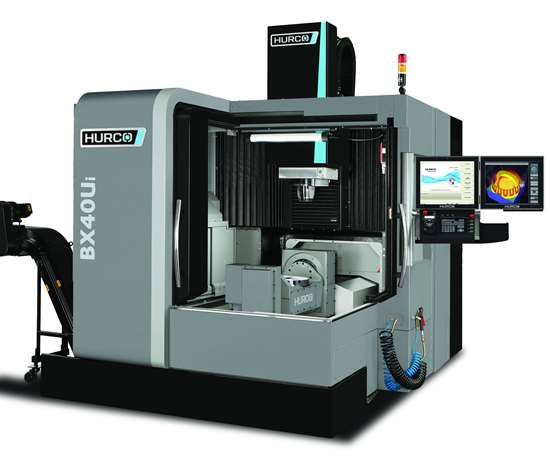 Hurco’s double-column BX40Ui five-axis machining center is equipped with a trunnion table mounted along the Y axis for performance and flexibility. The ladder structure and double-column design lend rigidity and support to the head casting. The 18,000-rpm motorized spindle and oversize linear guide rollers are said to make the BX40Ui well-suited to a range of applications. Additionally, the bridge structure is isolated from part weight in order to operate stably and predictably.

UltiMotion is a motion control system invented by Hurco that determines the optimal trajectory in which to run the tool, providing consistently programed feed rates and reduced cycle time, according to the company. Among UltiMotion’s benefits are faster cornering velocity than conventional motion and reduced machine jerk. The system features 10,000-block look ahead to adapt as required by the tool path.