NC program optimization software analyzes cutting forces on a tool for the entire tool path. It automatically optimizes feed rate when those forces exceed or are well below peak tangential force parameters to maximize tool performance and shorten cycle time. This comparison of tangential forces generated before and after feed rate optimization demonstrates the concept.

NC program optimization software analyzes cutting forces on a tool for the entire tool path. It automatically optimizes feed rate when those forces exceed or are well below peak tangential force parameters to maximize tool performance and shorten cycle time. This comparison of tangential forces generated before and after feed rate optimization demonstrates the concept.

DSC, located in Grand Prairie, Texas,knew about Cessna’s successes optimizing a number of its part programs using machining process modeling software from Third Wave Systems. Chris Mueninghoff, NC programming supervisor at DSC, says a titanium forging for a commercial application proved to be the ideal test part for Third Wave Systems’ AdvantEdge Production Module software. That’s because the part is one of the most challenging ones Bell machines. Nearly 30 percent of the titanium forging has to be machined away to complete the part, representing more material removal than most other components at Bell. The carrier measures 16 inches in diameter and 6 inches tall. 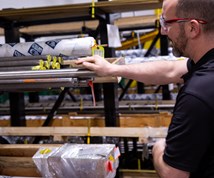 The Production Module software integrates CAD, CAM, machine dynamics and workpiece material properties as it analyzes machining operations on a given part. As Mr. Mueninghoff explains, the optimization process starts by importing a 3D model of the part and its corresponding machining program. The cutting tools used for each operation are defined by key characteristics such as rake angle, helix angle and tool material. Information about the machine tool and setup is entered, too, including machine horsepower and torque as well as fixture rigidity and cutting force limits. Finally, workpiece material is selected from the software’s database.

The software uses this information to predict the cutting forces tools will experience along their entire tool path. These forces will fluctuate during a cutting operation primarily due to parameters such as feed rate, tool orientation and workpiece material. To optimize each operation, the software compares the calculated force at each line of the original G-code against upper and lower force limits. It then automatically increases or reduces the feed rate accordingly. For example, when force values are well below a defined upper limit, the feed rate is increased to a stable point below the maximum accepted force a tool can experience. This results in not only faster cutting, but also more balanced cutting tool forces. (The graph on the previous page shows typical results of this process balancing for a titanium part.) The software analyzes and generates the modified G-code with new feed rates in 10 to 15 minutes, depending on part complexity, Mr. Mueninghoff says.

Bell validates each modified part program by machining an actual part and sending it through all normal inspection procedures to verify that the modified program will not damage the workpiece, machine tool or cutters. The cycle time for the titanium test part was reduced by 30 percent after process optimization. Since that original test, Bell has used the NC optimization software on approximately 250 components, many made of hardened steel alloys. Most recently, Bell’s NC program optimization efforts have come full-circle to titanium. It refined a program to machine a larger titanium carrier used on the V-22 Osprey tilt-rotor aircraft. These carriers were produced in a two-machine cell. Because Production Module software reduced cycle times for these parts by 25 to 30 percent, however, Bell was able to shift all production to a single machine.

Mr. Mueninghoff says the NC program optimization software has also lead to two other side benefits. One is better cutting tool life and wear resistance. The other is the generation of better overall parts. It’s important to gearbox component designers that Bell limits the amount of fatigue and stress introduced into parts during machining. The optimization software allows Bell to show that it is able to reduce component cycle times without applying techniques that could potentially decrease the life of a key component. In fact, Mr. Mueninghoff notes that DSC is actually putting less stress into the part during machining, ultimately resulting in a higher-quality part.