William Berry, president of Die-Tech & Engineering, says the process for rapid die building as described in an article about Die-Tech by Modern Machine Shop proved essential for building and delivering a die within five days that was urgently needed for making ventilator components in response to the coronavirus crisis. Indeed, showing that article to the customer as a way to explain his shop’s distinctive process helped Die-Tech win the job, Mr. Berry says. 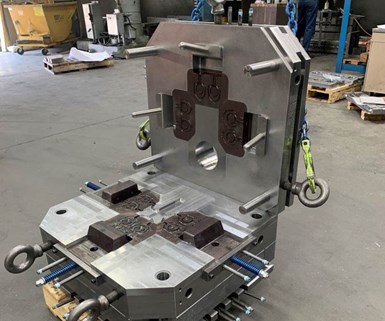 Profitable Additive Manufacturing Is Not an Oxymoron
In the Supply Chain, Flexibility Equals Strength

Die-Tech’s process for streamlining die lead times involves beginning machining before engineering is done, setup relying on self-locating workholding, and five-axis machining. Though the MMS article was published a decade ago, Mr. Berry says the process described there is still what the shop follows. For maximum speed in this case, the shop devoted as many resources as possible to producing different components of the die in parallel.

“We put four lead engineers and 50 other guys on it,” he says. “At one point, we had 11 five-axis machines all working on different parts of it at once.”

The shop has since shipped other dies related to other ventilator components. By the time this post appears, four other dies will have been shipped to Twin City.

Referring to the MMS article, Mr. Berry says, “You wrote about how to make dies fast 10 years ago, and now we really need to put to use that capability.”

Significantly, though, the capability needed to be here — in the United States Before the crisis, the original piston part was produced using a die made in China. The U.S. mold and die making industry has been imperiled in recent years, leading to government measures to protect this domestic capability. Mr. Berry believes this crisis illustrates the importance of maintaining a healthy level of domestic tool and die expertise.