Renishaw probes, used both on and off the machine tool, helped Tridan Engineering turn a Rally car part in just 17 days. It previously would’ve taken months to complete and inspect.
#casestudy

Tridan Engineering, based in the UK, relied on Renishaw machine tool probes to align complex castings as part of a motorsport machining contract for Ricardo Performance Products. For a project that normally would’ve taken about two months to complete, the turnaround time on the first batch of parts was compressed to 17 days without any compromise in the quality standards demanded by the client. 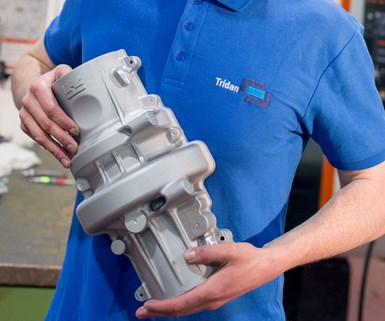 This casting is for an axle assembly commissioned by Ricardo Performance Products on short notice, compressing a two- or three-month project into a mere 17 days. Renishaw technologies helped Tridan Engineering deliver on time.

Part of the Langham Industries Group, Tridan was established in 1968 to provide a total outsourcing partnership and machining service to international customers. The company currently employs around 60 people and is approved to both AS9100 and ISO:14001 certifications. Sectors served include aerospace, military, automotive, motorsport, medical and marine.
The machine shop has CNC grinding and sliding-headstock turning capabilities as well as a tooling department. Its 14 CNC machining centers include Mazak Variaxis i-600 five-axis machines and HCN500 HMCs. The latter are configured with twin pallets and 80-station tool carousels.

“Ricardo Performance Products was having problems in the testing of a rear axle for a Rally car that we had manufactured on previous occasions,” explains Paul Coupland, machine shop manager at Tridan. “The issue was one of design and strength, so they needed a new ‘beefed-up’ axle to test. A project like this would normally take eight to 10 weeks as we arranged meetings with the customer, offered design-for-manufacturability recommendations to help remove cost, prepare tooling and so on. However, we were given just 17 days in order to meet a date slot that had already been booked at the test house.”

Two complex castings make up the rear axle assembly: a cover and a main case.

“On our five-axis machines, we used Renishaw RMP600 probes, which enable us to balance the cover castings accurately on the first operation,” Mr. Coupland says. “That way, we can guarantee to Ricardo that the holes and features are where they need to be. Similarly, on the horizontals we use Renishaw OMP60 probes, which are again used for balancing the main case castings on the first operation to ensure we supply good parts to the customer.” He adds, “This proved vital for the first batch, as Ricardo had precious little time between assembly and delivery to the test facility. There was no margin for problems or delays at the assembly stage. The parts had to fit the first time.” 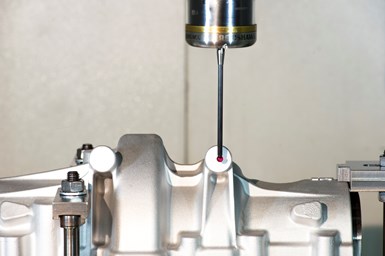 When machining a casting, it is important to create a datum or some other point from which to work. By setting the position and alignment of the casting using Renishaw machine tool probe technology, Tridan makes sure that the machining process automatically adapts to any variation in stock condition. In this scenario, the work coordinate system is automatically aligned correctly to each part. Optimal part setup can help avoid undercuts.

The process requires a measurement dataset of the blank casting to be aligned to the position and orientation of datum and machined features, which is where the Renishaw probes come into play. Standard routines built into modern CNC controls simplify the integration of probing cycles into machining operations. 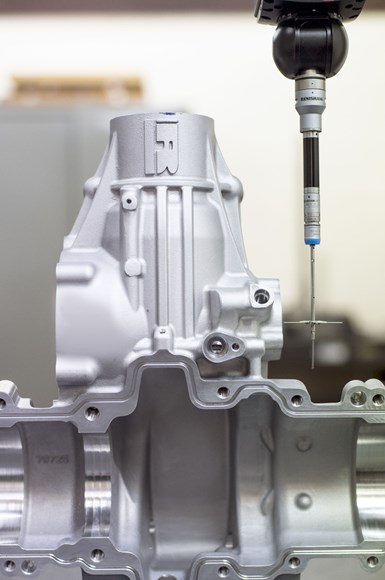 After separate machining of the cover and main case components, the two parts are bolted together and machined as an assembly on Tridan's HMCs. They are then separated and kept in pairs before tooling holes are machined as the final operation (once again on a horizontal machine).

But the work doesn't end there. “With every batch of castings machined for Ricardo, we have to supply a FAIR (first-article inspection report), detailing all critical dimensions on the part,” Mr. Coupland says. “For this, we use our coordinate measuring machine (CMM) with a Renishaw PH10MQ probe head to deliver complete peace of mind for both ourselves and the customer. We use various attachments with the PH10MQ, including the Renishaw TP20 kinematic touch trigger probe.”

The Renishaw probe on the CMM allows Tridan to access the internal recesses and awkward features on the castings. This CMM is also used to perform first-off inspection for machined castings, although some features are checked using Tridan's manual CMM.

“Accuracy is the main reason we use Renishaw technology,” Mr. Coupland says. “I don't think we could do half of what we do without their probes.”

Speed and Efficiency (and Hard Work) 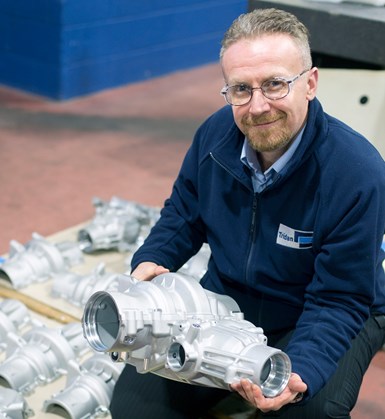 The ability to align the castings accurately and efficiently using Renishaw machine tool probes and perform dimensional checks using Renishaw CMM probe technology meant that Tridan could give its customer a quality product in the short timeframe specified.

“Without doubt, speed and efficiency are the major benefits,” Mr. Coupland concludes. He reckons that without the Renishaw equipment, the parts might have taken days to measure manually.  Even still, he adds, “The tolerances involved would make manual measurement almost impossible.”

By working closely with Ricardo and operating 24 hours a day, seven days a week, Tridan was able to deliver the new axle castings at 10 a.m. on the day prior to the scheduled test.