After Superior Tool and Mold invested in five-axis machining capacity from Delcam and DMG/Mori Seiki, it realized improved quality and greater profitability. 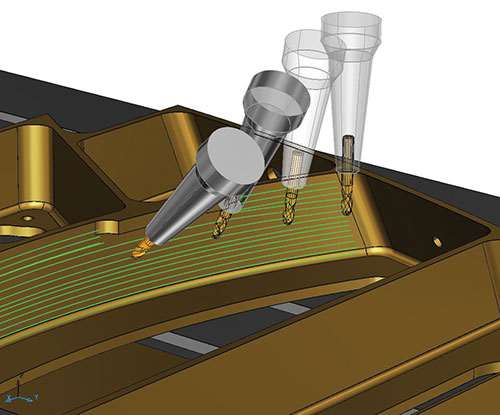 Superior Tool and Mold specializes in the design and build of injection molds for automotive parts such as this Solstice back panel.

Like a number of shops across North America, Superior Tool and Mold recently added five-axis capability to increase competitiveness. According to the company, both the machine it purchased from DMG/Mori Seiki and the CAD/CAM software it purchased from Delcam are essential for reducing machining time and improving surface finish. Superior Tool and Mold’s experience is a useful review of how five-axis machining can improve part quality and reduce lead time and setup errors, all of which ultimately lead to greater profitability.

Established in 1993, Superior Tool and Mold operates from a 15,000-square-foot facility in Ontario, Canada. It specializes in the design and build of injection molds for automotive, industrial and consumer industries. Before switching to five-axis technology, any given part might have required 10 to 15 setups on a conventional three-axis machine. Now, it uses a DMC 125 U duoBlock five-axis machine from DMG/Mori Seiki (Hoffman Estates, Illinois) and five-axis PowerMill capability from Delcam (Windsor, Ontario) to achieve more in a single setup. “It basically comes off the machine as a finished product,” says programmer Andrew Gruening.

Although the shop faced a learning curve when it first implemented five-axis machining, Delcam software enables experienced users to set up templates for less-experienced operators to save time and reduce errors on future programs. Also, full-process computer simulation helps prevent mistakes on the shop floor. “It was a learning curve on the machining, but we had in-depth training through Delcam, and within days we were confident that we could replicate what we were doing in training in the real world,” Mr. Gruening says. “We’re picking up work that we had to turn away,” he says.

Another part of the learning curve for new five-axis users is often adjusting fixturing and workholding strategies. For example, standard workholding devices generally do not enable clear access to multiple sides of the workpiece, whereas specialized five-axis fixtures, chucking mechanisms, and magnetic workholding are designed for that purpose.

Software is crucial to realizing these benefits. A wide range of five-axis strategies are available to improve the manufacturing process, including through a curve, through a point, profiling, automatic calculation of tool position, and gouge and collision checking. In addition, Mr. Gruening says leads and links can be edited to position five-axis transitions in areas of the surface that won’t be visible. “Delcam goes to great lengths to make sure the software is compatible with machine tools that shops have,” Mr. Gruening says. “Right out of the box, we had a perfect post that matched the software to the machine,” he says.

The cost of a five-axis process might be of concern to some shops. According to Delcam, that it is often caused by a lack of understanding of the potential applications of five-axis in a particular market. Once a shop fully understands where benefits can be achieved, reduced operating costs and increased tool life and efficiency can offset the initial investment. Plus, more applications will be open to five-axis machining as the technology improves.

Mr. Gruening says Superior Tool and Mold made the right choice in adopting five-axis capabilities. “We took the initiative to update our company, update our machinery and update all our software, and we are starting to reap the benefits now,” he says.