Loading and unloading a repetitive job was straining employees at B.I.C. Precision Machine, so the shop integrated a cobot arm from Absolute Machine Tools into its production process.
#casestudy

Machine-tending automation is becoming more and more common in job shops across the United States, taking on a variety of forms from simple to complex. For many of these shops, the system of automation increasingly can be something that does not occupy much space on the production floor, does not require large-scale integration, and has the flexibility to be easily repurposed for future jobs. B.I.C. Precision Machine Co. Inc. is an example: Automation here took the form of a cobot arm.

Last February, the Blanchester, Ohio-based job shop decided to automate a repeat contract job that was very labor intensive. In the past, one employee would load and unload parts from two Doosan lathes that were situated perpendicular to each other, producing silicon iron cores used in railroad safety devices. The quick cycle time left employees essentially going in circles all day as they tended the machines.

To ease the physical burden of this job, the shop first retrofitted the machine doors to automatically open, then installed a foot pedal and a palm button to open and close the chuck, but the repetitious nature of the work was still hard on employees. To make matters worse, the shop was running into quality issues as it shifted employees in and out of that position in week-long assignments.

“We were running two shifts on these parts around the clock, and we were getting complaints,” says Foreman Shawn Allen. “Employees hated the loading and unloading of the two machines.”

To solve this problem, B.I.C. invested in Productive Robotics’ OB7 collaborative robot arm, which was supplied by Absolute Machine Tools. The OB7 is an independent seven-axis cobot that has a 1,000-mm reach and can accommodate an 11-pound payload with ±0.1 mm repeatability.

The ability for the cobot arm to work safely beside B.I.C.’s employees without the need for safety fencing was very important for the company because it did not want automation to replace a human job. Instead of employees spending their week performing repetitious loading and unloading tasks, they are now free to stage parts for the cobot arm and do more interesting work as well, such as quality checks on the tight-tolerance parts. 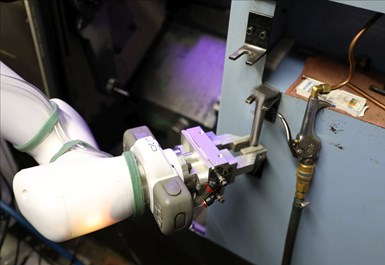 The OB7 places the part in the loading station.

To integrate the robot into the lathe cell, Absolute worked with B.I.C. to place the machines parallel to each other so the cobot arm could be situated between the machines. Using a custom pneumatic gripper designed by Absolute, the cobot unloads the core from the first lathe and places it in the lower specialty staging station located near the door of the second lathe. The cobot arm then goes back to the first lathe and grips and loads an unmachined core waiting in the lathe’s single staging station. The cobot arm moves back to lathe two, where the gripper removes the completed part and places it in the upper staging station before loading the machine with the core waiting on the bottom station. Finally, the cobot arm takes the finished part from the upper staging station and places it on a tray of completed cores. This process enables the cobot arm to access as many as 20 cores in one process, running for about half an hour before an employee is needed to stage new cores for turning and move the completed cores to a final milling operation. 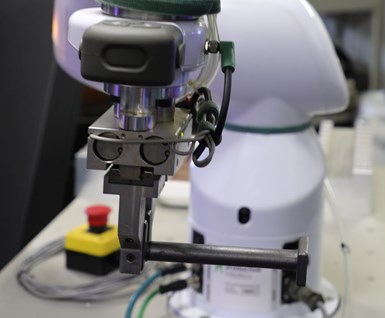 While B.I.C. is pleased with the final outcome of the cobot integration, the initial install took some effort. The first challenge was consistently gripping the part. Since the silicon iron core starts as a forging, the parts are inconsistent in shape. To remedy this, Absolute devised a custom pneumatic gripper to replace the cobot arm’s original electronic gripper. The second challenge was the sheer number of locations — 10 total — the shop needed to teach the cobot arm in order to perform the actions described above. Luckily, the OB7 is not programmed like traditional robots. Instead, programming uses a Samsung tablet running an application in teach mode that tracks and mimics the cobot arm’s path.

Burns says getting to the right programming and gripper took time — even “easy” automation like a cobot was not a success at once. However, avoiding repetition fatigue and hitting the tight tolerance requirements have made the automation worthwhile, she says.