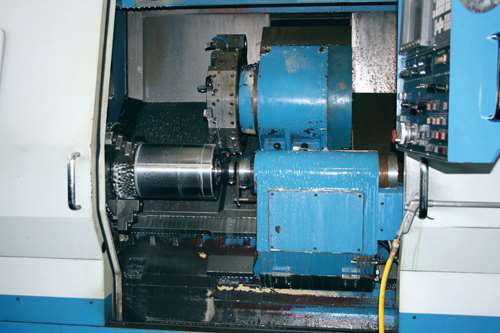 The HL-55 CNC lathe turns the OD of a choke body. This machine, the first the company purchased from FEMCO, accommodates the company’s larger parts while occupying less floor space than the previously used model.

CNC lathe operator Jaime Lopez performs dimensional verification on the inlet end of a heater choke body. This part was produced entirely with machines from FEMCO, with most operations performed on the shop's CNC lathe and mill.

When Houston Oilfield Equipment brought its first FEMCO CNC lathe online in 2001, few would’ve guessed it would be the first in a long line of machines purchased from the Garden Grove, California-based supplier. By that point, the company had tried three different machine tool brands, none of which provided the mix of quality, ease of use, responsive service and affordability needed to meet delivery times and keep product pricing competitive. Standardizing on the FEMCO line eliminated workflow bottlenecks while reducing cycle time and tooling costs.

Houston Oilfield Equipment was founded in 1993 in Houston, Texas, an oil and gas industry hub from which the company could serve both domestic and international markets. Its main product is a choke valve created by owner/president Tom Bowers that is used in oil and natural gas drilling. The company’s 16 employees rely on a number of machines from FEMCO, including six CNC lathes, one CNC mill, one manual mill, two automatic saws and a hydraulic drill press. The majority of the material the company machines is steel, including carbon steels and varieties such as 4130, 4140, 410SS and 17-4 PH SS. 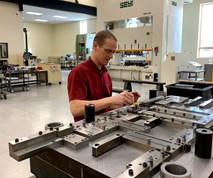 The CNC lathes and the CNC mill are used for large production runs. The CNC lathes, which are capable of heavy stock removal, finish machining, ID/OD threading, boring, machining tapers and angles, and more, play a part in machining all component parts of the product line. Meanwhile, the CNC mill produces ring joints on flanges and threads as well as keyway slots and angular details on part IDs and ODs. The manual mill and lathe are used for low-volume jobs, with the mill performing similar operations as its CNC counterpart and the lathe—the shop’s least-active piece of equipment—repairing or machining single parts. The automatic saws cut solid bar and tubing into pieces prior to machining. Finally, the hydraulic drill press performs boring operations, clean-up operations after welding choke body flanges, and machining of autoclave HP thread ports and 1/2" NPT ports.

The shop moved to the FEMCO line in response to rising customer demand. As business increased, Mr. Bowers and shop foreman Beto Zamarripa noticed significant bottlenecks that threatened to cause overlapping and delay in delivery times. To remain competitive, the shop needed to expand its CNC machining capacity and address problems with training new machinists. Employee difficulties with operating the shop’s previous machines led Mr. Zamarripa to spend a great deal of time dealing with that issue at the expense of other important duties.

Searching for answers, Mr. Bowers met with FEMCO’s Southern Texas distributor, Scott Murray. Mr. Murray convinced Mr. Bowers that the company could provide what the shop was looking for—a professional relationship that provided a reliable source of support and knowledge. The machines themselves also seemed promising, with features including spindle bearings that can safely support heavy loads and an open configuration that eases access to machine internals as well as part loading and unloading. “Once we standardized on the line, our problems seemed to disappear,” Mr. Bowers says. “The machines are easy to operate and maintain, and their Fanuc controls are easy to understand.”

Mark Kindell, the plant superintendent, adds that any operator can run any given machine and not encounter any problems, such as the turret issues the shop experienced with some of the other machines it had used previously. Tool costs have also decreased because the same tooling can be used throughout the shop, as opposed to putting in special orders for different toolholders used on different machines. Perhaps most significantly, the shop’s process time has improved by an average of about 20 percent since standardizing on the FEMCO line.

One recent job involving the processing of flanges that form part of the inlet and outlet connections of chokes provides an example. These involve OD turning, ID boring, machining of ring grooves and drilling of bolt holes. With the company’s previous CNC machines, this job required approximately 2 hours of process time. That process time has been reduced to 1 1/2 hours using the new machine line. “We have had very little downtime with FEMCO compared to other brands, and their service technicians are very responsive to our needs,” Mr. Bowers concludes. “We will most definitely purchase more machines as our business warrants.”