Outside-In: Why This CNC Machine Shop is Adding Finishing Processes

Since being announced as a Top Shop in 2014, Complexus Medical has steadily grown while bringing some previously outsourced processes in-house for lower manufacturing costs and faster lead times.
#topshops #partscleaning 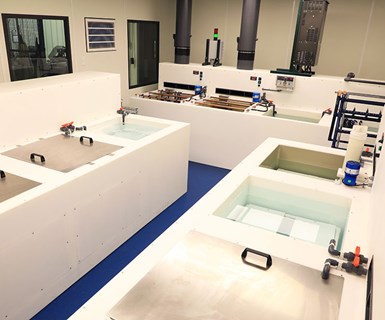 The medical industry’s shift from nitric- to citric-based passivation is spurring machine shops such as Complexus Medical to bring that finishing process in house. (Photo: Complexus Medical.)

What I’ve noticed reconnecting with past Top Shops winning companies is that they continue to grow while expanding and upgrading their manufacturing capabilities. For example, Mishawaka, Indiana’s Complexus Medical has increased its staff and purchased additional twin-turret/twin-spindle turning and five-axis machining capacity since being named one of our 2014 winners. (This story describes how the manufacturer of complex orthopedic and implantable components and assemblies benefits from those types of advanced machines.) This has both spurred and supported the shop’s continued growth over the years.

For cost reduction and faster lead times, we brought passivation and electropolishing in house. — Michael Behrens

Similarly, Complexus has recently brought in two processes that it previously outsourced — passivation and electropolishing. Michael Behrens, who in 2016 took over for his father, David, as company president, points to a few reasons for this. “Passivation represents one of our company’s highest spends,” he explains. “We were also driving to our passivation as well as electropolishing and heat-treating vendors an hour away upwards of three times a day. So, for cost reduction and faster lead times, we brought passivation and electropolishing in house. We’ll continue to outsource heat treating because we simply don’t have room for it, and adding it doesn’t make sense given our facility is temperature- and humidity-controlled.”

But what really prompted the addition of passivation is the medical industry’s shift away from nitric- to citric-acid-based processes for orthopedic devices. “We’ve wanted to bring passivation in house for the longest time,” Mr. Behrens says. “However, nitric acid is terribly corrosive and damaging to machine tools. It wasn’t worth the risk or hassle. On the other hand, citric passivation is much easier to work with and is about as corrosive as orange juice.” 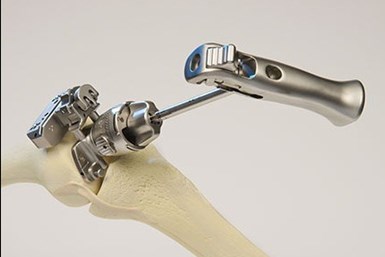 Complexus delivers devices completely machined, laser-welded, laser-marked and assembled to its customers. By recently bringing passivation and electropolishing in house, it will have better control over those processes. (Photo: Complexus Medical.)

Complexus purchased the passivation and electropolishing systems from Jacob Hay Co. in Wheeling, Illinois. Per environmental regulations, the shop had to construct a dedicated room for the equipment that could contain a catastrophic failure whereby all processing tanks were compromised. This room required significant ventilation capacity, too. But it found that the ventilation system was removing too much of the conditioned air in the facility. As a result, the shop had to install a make-up air system that added 20 tons of air conditioning capacity to even out what the ventilation system was pulling in. Complexus also added an air lock, because the ventilation system was pulling in pollen, mold spores, mosquitoes and other contaminates from the outside when the building’s overhead door was open.

Each process also required customer validation. For passivation, this included boil, copper sulfate, salt sprays and similar tests to determine that the process was removing all free iron from the surfaces of stainless steel parts. For electropolishing, which positively charges a part in an electrolyte to remove material peaks to smooth the part’s surface, a number of samples are processed to determine that a given power setting will repeatably remove the same amount of material. This is especially important for press-fit parts such as pins that must precisely fit mating holes.

The passivation and electropolishing systems were installed in 2019 so that validation could begin to bring them online in 2020. Mr. Behrens believes they will help position the shop accommodate further growth, and it might start winning new business from unexpected sources.

“Until recently, if you were a supplier like Complexus and weren’t already on a medical OEM’s approved supplier list, that company wouldn’t even take your call,” he explains. “But it seems consolidation among contract manufacturers in the orthopedic industry has prompted the OEMs to begin considering new vendors especially for complex instruments.”