One of the world’s biggest defense contractors standardized its metrology software to open up a significant process bottleneck: measuring huge parts on a variety of equipment.

Laser trackers allow BAE Systems to bring the measurement device to the part. This is especially advantageous when workpieces are as large as this one.

Large workpieces present unique machining challenges. Inspecting such parts can be equally vexing, especially when measurement is a key element of the manufacturing process for components that comprise complex systems. In fact, inspection became such a significant production bottleneck for BAE Systems, one of the world’s largest defense contractors, that it had to rethink its approach to part measurement.The BAE Systems facility in Minneapolis, Minnesota specializes in the design, production and service of armored combat vehicles, artillery systems, missile launchers, intelligent munitions and major- and minor-caliber naval guns. These devices have components that are as intricate as they are immense. The defense contractor found that by standardizing on one platform of metrology software, it could streamline its measurement techniques using machine tools, laser trackers and CMMs from multiple manufacturers.

Some of the components for the U.S. Navy’s 155-mm Advanced Gun System (AGS) are machined from massive weldments that can be as large as 35 by 20 by 20 feet. In-process inspection of these welded assemblies is necessary to ensure dimensional integrity as they progress through welding, machining and final assembly.

Unfortunately, programming and staging these large parts for measurement on a CNC machine or large CMM tended to be a nightmare. Chuck Vogland is the quality manager—propulsor and CMM applications for BAE Systems’ Minneapolis location. Ten years ago, the facility had three CMMs, each with different software. Mr. Vogland says the CMM inspection process used to consume so much time that manufacturing engineers added several days to the production schedule to account for anticipated delays at the CMMs.

As a result, the company decided to standardize on one software platform for those CMMs: PC-DMIS from Wilcox Associates, a member of Hexagon Metrology. BAE Systems worked with its dealer, Productivity Quality Inc. (PQI), and Wilcox Associates to garner licenses, training and technical assistance. PC-DMIS is an open-architecture, CAD-enabled metrology programming system that is compatible with a wide range of measurement equipment machines and devices. An immediate benefit of this initial effort was the ability to import Pro-Engineer CAD files that are used throughout the design and manufacturing enterprise directly into PC-DMIS, drastically reducing programming time.

Subsequently, the company purchased a new Brown & Sharpe global CMM originally equipped with PC-DMIS software and then retrofitted an older Brown & Sharpe with a new control and PC-DMIS. In addition, it purchased an offline version of PC-DMIS so it could create part programs on a computer directly from CAD models. Offline programming provided an effective means for BAE Systems to convert approximately 40 legacy programs used on the retrofitted CMM into PC-DMIS format.

The conversion to a single measurement software platform did not stop with CMMs. Within the last year, BAE Systems purchased two Leica laser trackers with touch probes. These devices, which have six degrees of freedom, can be used either as laser measurement tools or a portable CMMs with the touch probe. They allow the company to bring the measuring instrument to the workpiece when appropriate, saving time and mitigating the hazards of moving large parts to CMMs. The laser trackers also allow faster weld layouts and easier part alignment during assembly. When manufacturing issues arise, it’s possible to quickly measure large components on the shop floor and give manufacturing engineers a fast, intuitive understanding of the problem. A 46-inch, flat-screen monitor allows inspectors to clearly see a model of the part being measured.

The company’s Minneapolis facility has three measurement system programmers, two full-time and one part-time, to develop PC-DMIS programs for CMMs, laser trackers and portable measurement systems within the same offline programming environment. In 2008, the company took delivery of five-axis Ingersoll machining centers—two for the Minneapolis plant and one for its sister facility in Cordova, Minnesota. Each machine is equipped with a spindle probe and PC-DMIS NC Server software for automated on-machine gaging. This enables on-machine, in-process inspections without the need for additional setups or portable measurement equipment.

Mr. Vogland concedes that programming a five-axis mill with a 4-feet-diameter head for on-machine inspection is somewhat trickier than programming a CMM or laser tracker. An applications engineer from PQI helped both BAE Systems locations in creating initial programs so PC-DMIS could be applied more quickly as well as pointing out useful tricks to the company programmers.

BAE Systems has benefitted from cross-platform, enterprise metrology software in a number of ways. Ultimately, quality assurance has moved from being a bottleneck to being an agent of manufacturing and inspection efficiency. Using a single software platform for various measuring devices has also minimized training requirements and eliminated the need to have staff specialists for the various types of measurement equipment. 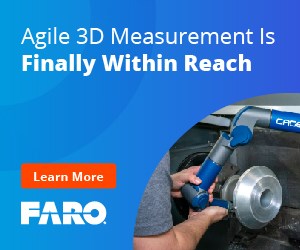