Capability to generate something close to a true digital twin can significantly improve confidence in CAM program prove-outs.
#datamatters

The term “digital twin” is often used loosely, but it generally implies more than just an accurate virtual model of an object or process. The virtual model also synchronizes with its physical counterpart, leveraging sensor data to perfectly mirror reality. However, CNC machine shops do not need the full capability of a digital twin — which, so far, is still rare outside the lab or the show floor —  to make practical use of the kinds of capabilities that make it possible. 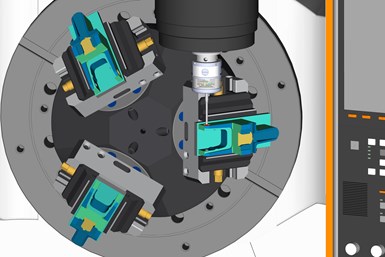 A screenshot taken in Esprit from DP Technology, one of the various CAM packages now capable of employing an identical virtual replica of Mazak machines for programming and program prove-out. Image: DP Technology.

One example is capability to simulate the workings of individual CNCs and machine tools rather than only the CAM programs. The latter approach, which focuses on only the interaction between tool and workpiece, leaves out fixtures and other potential interference points within the workzone as well as the kinematics of the machine itself. Even in cases when damage to machine or part is unlikely, less realistic simulations can reduce confidence in offline programs. This can result in unnecessary hand-wringing and even downtime as personnel waste time and effort ensuring everything is right.

Simulating on the machine would solve the problem, but this approach is often considered too slow to be practical, says Robin Cave, national accounts manager with Mazak. After all, the complex machines that benefit most from simulation, such as the company’s five-axis and mill-turn models, are “almost infinitely variable” in terms of the configuration a customer might request, he says. Mazak’s answer is to enable users to duplicate the workings of an individual machine’s CNC on an offline PC (the current version of this software is SmoothCAM AI, which works with the company’s latest SmoothAI control for five-axis and mill-turn machines). This brings virtual reality that much closer to actual reality by ensuring program prove-outs account for stroke and parameter limits, spindle configuration, and other data unique to an individual machine tool.

CAM and simulation software developers also prize the value of kinematic and other machine-specific information. One recent MMS article covers a manufacturer that purchased and submitted a design file of an important machine tool to NCSimul, a division of Hexagon Manufacturing Intelligence that specializes in optimizing and validating part programs. Notably, this software also simulates the actual G code, the native language of the machine tool. Typically, the G code run by the CNC is generated from CAM programs by a postprocessor, and the translation is not always perfect. In another recent case involving software from Vericut system developer CGTech, simulation in G code caught an error that otherwise would have led to a failed build on a large-scale additive manufacturing machine.

Other technology is moving beyond even G-code-level simulations of faithfully rendered equipment. The MultiGrind Styx system from Haas Multigrind LLC, a builder of precision grinding machines that are popular among medical manufacturers, is designed to replicate the real-world physics of material removal on an even more granular level by, essentially, doing the math required to eschew approximations and accurately depict even the most minute ripples and imperfections in the workpiece surface.

David Drechsler, the company’s business development manager for North America, says these ultra-realistic simulations are designed for multi-axis grinding operations that produce complex, multi-faceted workpieces. “Some simulations are kind of like stop-motion,” he explains. “You’re basically subtracting the volume of the wheel from the volume of the blank, then incrementing to the next position and repeating that process. You may control for stepover or resolution, but on the real workpiece, there might be a two-tenths step at the point of that transition. Our technology essentially creates a CAD model of the (grinding) result—not this faceted, tessellated, pixelated thing, but an actual mathematical model.”

The system also employs ray tracing, a technique that simulates how lighting plays on a surface, to evaluate whether parts will meet aesthetic requirements. The computing power required for all of these calculations is too great for a single PC, so the system is offered as a cloud-based service.

The power of cloud computing aside, even the most realistic simulation doesn’t necessarily move and change with reality like a “true” digital twin. However, some manufacturers come close enough. For instance, my conversation with Mr. Cave focused largely on Mazatrol Twins, which extends the same machine-specific, offline programming capability enjoyed by users of SmoothCAMai to other, third-party CAM systems (at the time of this writing, options include Mastercam, Esprit, Autodesk and HyperMill). At any time, the CAM programmer can “poll” any Mazak machine on the floor for machine-specific data that is not included in CAM. Copied exactly from the SmoothAI CNC, the machine’s “twin” guaranteed to be accurate and up-to-date for programming and simulation, down to which specific tools are in which toolchanger slots, Mr. Cave says.

In addition to reducing setup time and improving programming confidence, the unveiling of Mazatrol Twins is telling in terms of at least how one major machine tool builder is thinking about issues surrounding digital twins, and machine shop digitalization more generally. “We’re essentially giving CAM developers a software kit to link to our machines directly, so they can get all the information that most companies used to guard like it was really important,” he says. “To me, this is a fundamental change.”