After adopting the Romi C 830 and C 510, TPEI can turn larger workpieces and take larger depths of cut compared to its previous lathes.
#casestudy 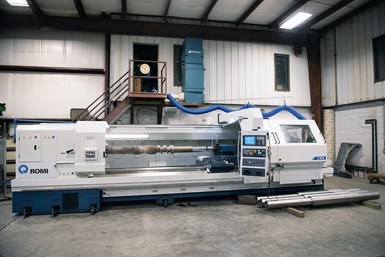 “What sets us apart from our competitors is our ability to manufacture everything internally,” says Jim Hower, engineer at Technical Processing and Engineering Inc. (TPEI). The Lehighton, Pennsylvania, manufacturer﻿ provides spare parts for continuous mixers and extruders, designs and manufactures compounding equipment, and repairs and rebuilds equipment for the plastics and rubber industries. For years, TPEI serviced its customers’ smaller mixers, but it did not have the equipment necessary to rebuild their larger equipment.

“The investment in the machine tools required to be able to repair or rebuild those larger units was pretty significant,” Hower says. “But we got to the point where we felt there was enough of a market to justify that investment.”

TPEI determined it needed to upgrade its manual lathe from a 160-inch bed with a 32-inch swing to a lathe with a bed length of approximately 200 inches in order to machine some of the components for those larger mixers and extruders. The company ultimately decided the Romi C 830 CNC lathe was the best solution for its needs. 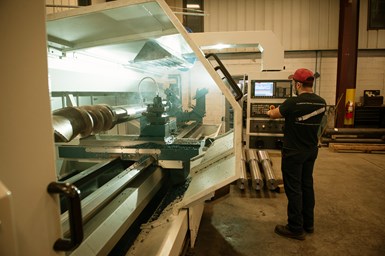 Nick Cramer, a CNC machinist at TPEI, turns a part on the Romi C 830.

“The number one reason for the decision we made was because of the weight of the machine,” Hower says. Speaking highly of the machine’s approximate net weight of 14,960 pounds, he says “weight is a huge thing as far as the lathe running smoothly and not vibrating. You don't want it chattering.”

The 197 inches between centers and the 45 horsepower reaffirmed the company’s decision. Moreover, TEPI was impressed enough with Romi’s ability to meet its needs for the larger lathe that it also purchased a smaller model, the Romi C 510, to replace its aging, comparable-sized lathe from another company.

“We’ve been extremely pleased with the productivity of the 510,” Hower says. Despite having roughly the same horsepower as the previous lathe, the 510’s﻿ bed and headstock robustness and quality of the spindle cartridge enable the manufacturer to take heavier, faster cuts. “It will outperform what we replaced twofold as far as feed, speeds, depth of cut and other specs. Once we went and demoed the 510, we realized the depth of cuts we can take on that Romi lathe are about double what we were doing, and the chip load is probably about 50% more. It's just far more efficient in that respect.” 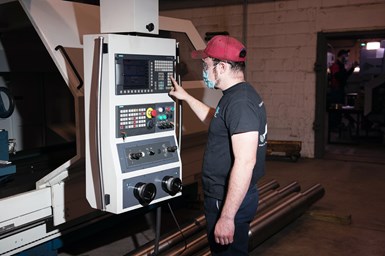 Prior to purchasing the two Romi lathes, Hower says his team was hesitant about learning the machines’ Siemens control. For reassurance, they visited a Romi customer as well as the Romi showroom in Cincinnati, Ohio, to see the machines in action and experience the Siemens control firsthand. Hower says that these experiences solidified his confidence in the lathes and the control system.

In particular, he was impressed with the control’s ShopTurn feature, which supports operator action with graphic help displays. He says TPEI’s operators found it more convenient than G-code programming. He says he also finds the threading options user-friendly and accurate, drawing attention to how correct tool geometry in the tool page can lead to threads being within tolerance on the first try.

While Hower and his team admitted there were pros and cons to the new control, they concluded that its capabilities, performance, ease of use and price outweighed any learning curve.

Ultimately, the team found most machinists with a basic understanding of machining and CNC programming took about one month to efficiently run the Romi machines, with most of them demonstrating complete knowledge after five or six months.

“﻿The control wasn’t a problem, it was just different.”

“Once we got the machines installed and our team saw their performance, how they handle, how they work, everybody agrees it was a great investment. The control wasn’t a problem, it was just different.” 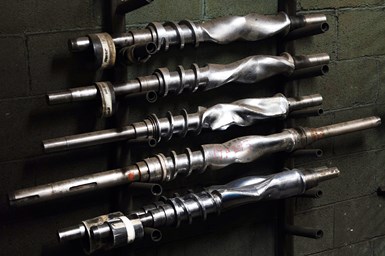 Hower says the Romi C 830 achieved diameter variances of about a thousandth of an inch when cutting shafts in excess of 10 feet long.

TPEI is using the C 830 to machine the rotor (mixing element) that goes inside a mixer. Those finished elements range from 1-15 inches in diameter and up to 160 inches in length. The company turns raw ingots up to 16 inches in diameter down to size.

During heavy roughing sequences, TPEI has been able to regularly remove 0.350 inch at 0.02-0.032 inch per revolution on 30 HRC material. This loads the machine between 60-70% on this material, the parameters above are twice what TPEI could achieve previously.

Hogging produces similarly positive results for TPEI. The Romi C 830 has worked particularly well on TPEI’s low-carbon steel hogouts, achieving beyond a 0.150-inch depth of cut while feeding the bar at a 0.02-inch chip load. Hower also says the lathe has worked well when hogging quenched and tempered bar that ranges from 29 to 31 HRC alloy steel.

From a performance point of view, the Romi C 830’s repeatability has also impressed TPEI. “We're cutting shafts that are in excess of 10 feet long, and we're not getting any diameter variance over the length of 10 feet,” Hower says. “If we do, it's about a thousandth of an inch. I'm able to put one part in and put the next part in and get the same results and not have to adjust offsets or anything like that.”

The Romi C 830 has even allowed TPEI to do some finish work, with Hower pointing to its ability to cut residual stock from roughing in previous operations through multiple passes with precision. The lathe’s digital readout also allows TPEI to measure how well the machine holds tolerances on diameters over distance.

“Overall, it was a great purchase,” Hower summarizes. “Just seeing the increase in production we're able to get out of these units, the increased capacity, the repeatability and performance, and with the price point being right, we’re very happy with our decision to go with these Romi lathes.”