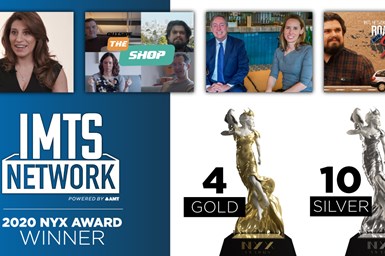 IMTS Network won awards in the Broadcast/Television category for its live events and original programming during September 14 – 18. During that week, the network premiered than a dozen different series that featured powerful ideas for productivity and inspiring stories from the women and men who are shaping the future of manufacturing. This programming is available on demand at IMTS.com/network.

“IMTS Network is a community-based storytelling venture that connects the entire spectrum of people within the manufacturing technology industry by providing a platform for them to share their stories,” says Peter Eelman, vice president and CXO of the Association for Manufacturing Technology (AMT), which owns and produces IMTS. “We are thrilled that the NYX Video Awards recognized the success in our new endeavor.”

“We are proud of all the amazing individuals, agencies and companies who joined the NYX Awards this year,” says Kenjo Ong, CEO of the International Awards Associate (IAA), which hosts the NYX Awards. “This win by IMTS Network is not just a testament to their unbridled talent, but one that will inspire many for years to come.”