The AirPick and EPick grippers will be available as part of Omron’s Plug&Play ecosystem of compatible peripheral equipment and software.

Robotiq, a provider of tools and software for collaborative robots, has announced that its AirPick and EPick vacuum grippers are now compatible with other major cobot offerings, such as the Omron Collaborative Robot series. The announcement of the grippers’ new compatibility accompanies the release of Robotiq’s updated software for its adaptive grippers. 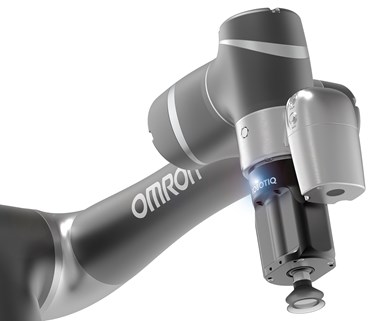 Known for their intuitive programming interface and integrated on-arm vision system, Omron cobots are said to enable safe, flexible and collaborative manufacturing between humans and robots. Combined with AirPick and EPick, they can perform machine tending, pick-and-place, packaging and assembly, according to Robotiq.

“Expanding AirPick and EPick’s compatibility to embrace other leading cobot brands such as Omron was an important objective for us,” says Jean-Philippe Jobin, CTO and co-founder of Robotiq.

Omron’s president and CEO, Tom Mathias, explains that his company has created a Plug&Play ecosystem of peripherals and software compatible with its collaborative robots. “We are excited to partner with Robotiq as part of this Plug&Play offering,” he adds. “Several of Robotiq’s end effectors are already offered as plug-and-play grippers, and the addition of these two vacuum grippers adds to the functionality of our collaborative robots.”