ABB Inc. has added the GoFa and Swifti cobots to its portfolio, offering easy-to-program automation for increased operational safety and efficiency. 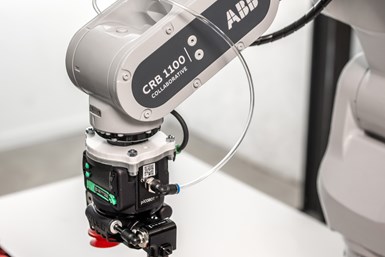 Users can operate GoFa and Swifti with ABB’s tablet- and smartphone-compatible setup tools, meaning customers will not need in-house programming specialists. ABB believes this simplicity will appeal to industries that have not invested in older, more complicated automation options — GoFa and Swifti customers can operate their cobot within minutes of installation, straight out of the box, with no specialized training.

“Our new cobot portfolio is the most diverse on the market, offering the potential to transform workplaces and help our customers achieve new levels of operational performance and growth,” says Sami Atiya, president of ABB’s Robotics and Discrete Automation business area.

“With this expansion, we are making cobots easier to use and deploy, with real-time support to help speed their adoption in businesses that may not have previously considered their use,” Atiya says. “Our experience is that the best performing operations harness people’s skills, alongside the potential of new technologies.”