Starrett’s AVR-FOV 0.14X features a 0.14 magnification lens with the widest-yet AVR field-of-view, and delivers measurements accurate to the micron level. 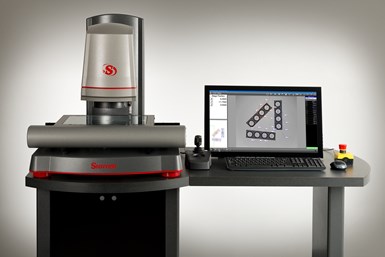 The L.S. Starrett Company has launched the AVR-FOV 0.14X, a variation of its AVR300 Multi-Sensor Vision System. This variation features a 0.14 magnification lens with Starrett’s largest field-of-view to date on the AVR Series, at 2.36" x 1.90" (60 mm x 48 mm). With “superimage” technology, which stitches together multiple images to form one larger image, and touch probe technology, Starrett says the AVR-FOV 0.14X can accurately inspect a wide range of features on large and complex parts, as well as multiple small parts.

"Building on the success of the AVR300 multi-sensor system, customers can now measure and inspect a wider range of parts, including those that are complex with intricate features," says Mark Arenal, general manager of Starrett’s Metrology Division. "The interface on the AVR-FOV 0.14X is user-friendly and intuitive so all users, including operators on the shop floor, can complete the inspection process."

The AVR-FOV 0.14X lens comes equipped with MetLogix’s M3 software package, a mouse and a touchscreen monitor to simplify user interaction. Programmable light outputs can integrate into the program as defined steps, such as activating when the automatic part recognition program initiates. An optional Renishaw touch probe quickly acquires discreet points along a part’s profile, as well as Z-axis measurements.