Demand for ventilator parts stretched this shop’s supply chain. Here is what it took to rapidly insource production.
#covid-19 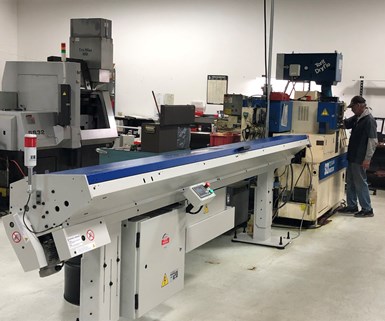 Aztalan Engineering made many changes in the span of just a few weeks to increase production of ventilator and anesthetic delivery parts in response to the coronavirus pandemic. The company could not have made many of these changes without the help of vendors and suppliers, including bar-feeder supplier Bucci.

About 90% of the parts Aztalan Engineering makes are for the medical industry. Some of this work is for GE Healthcare, including parts for ventilators and anesthetic delivery systems that can be retrofitted to serve as ventilators. In the midst of the coronavirus pandemic, the shop has had to drastically increase production of these parts. “For these parts, we're doing about six years’ worth in about six months,” says Kirk Kussman, the company’s vice president of sales and marketing.

Aztalan has been producing the anesthesia delivery parts for 30 years, and the ventilator flow control valves for three. Before the pandemic, another shop had been producing the ventilator parts for Aztalan. “When we brought it in three years ago, we inherited a supply chain. And that supply chain has been great, but there's only so much stress you can put on a company,” Mr. Kussman explains. “We're lucky that we had capacity to be able to be our own second source for parts.”

Becoming its own second source for ventilator parts during the coronavirus pandemic while keeping its employees safe has been a challenge for the Lake Mills, Wisconsin-based shop. “We've done a lot of huge transformations of our business in a really short period of time to meet the demand and do things the right way,” Mr. Kussman says.

The shop makes around 30 different parts for the ventilators and anesthetic delivery systems, but they’re all relatively small (“everything you can put in your hand,” according to Mr. Kussman) with tight tolerances and precise cleaning specifications. They’re made on a range of machines including horizontal mills, vertical mills, twin-spindle lathes and Swiss-type lathes. “The bulk of the parts run across the Swiss-type lathes,” Mr. Kussman says, “and that is where Bucci helped us out with a really amazingly fast turnaround.”

As production of the ventilator parts increased, Aztalan realized it needed to replace two bar feeders on its Swiss-type machines. One of the old bar feeders was too short. “It was a six-footer, so we'd have to cut bars down,” Mr. Kussman says. “That was inefficient.” The second bar feeder didn’t have the flexibility the shop needed. “We needed to run a lot more variety of sizes of turn-ground and polished material through there,” he explains. “We were kind of hamstrung on sizes that we could run through that bar feeder.” Maintenance Engineer Gerald Harris reached out to Bucci (Charlotte, North Carolina) about replacement bar feeders, and Bucci was able to turn around a quote within minutes. They quickly organized the purchase order for the two Iemca Ideal 325 bar feeders and made the necessary arrangements for delivery and installation. Within eight days the new bar feeders were up and running at Aztalan’s facility. “It never happens like that,” Mr. Kussman says.

Bucci wasn’t the only supplier that has helped Aztalan through this situation. “We had Zeiss and Concept Machine Tool put a piece of inspection equipment on our floor that usually has well over a month of lead time,” Mr. Kussman says. “We got it within five days.” The shop is also working on building out a new clean room so it can meet the strict cleaning specs of the ventilator parts, which has required the help of a number of additional companies. Other businesses that have stepped up to help Aztalan include M&H Industrial, which moved the new machinery; Russ’s Painting, which painted the lab; Epoxy Done Right, which coated the lab floor; and Midwest Electric, which replaced the lighting in the lab and wired the new machines. “Without all of the coordination from these vendors this would not have been possible from my standpoint,” Mr. Harris says. “We're very appreciative of our partners within this industry and how they have just bent over backwards to help us,” Mr. Kussman adds.

Beyond a willingness to help, good communication between Aztalan, its customer and its vendors has facilitated the shop’s fast and successful response to the coronavirus pandemic, Mr. Kussman says. “We let anybody who supplies us know that this is for critical parts if it is for the critical parts,” he says. The shop also has frequent conference calls with its customer, going over the changes that are occurring every day. “When they know something, they're letting us know and vice versa,” he adds. “We're passing that on to our suppliers, so they know what we're looking at.” 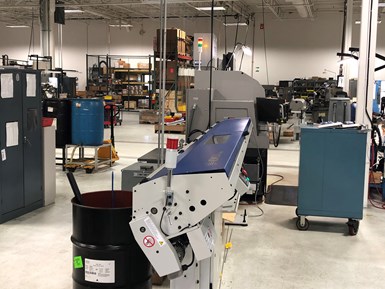 Maintenance Engineer Gerald Harris reached out to Bucci about two replacement bar feeders that were larger and could handle a wider range of barstock than the models it had been using. The company turned around a quote in minutes and within eight days, two new Iemca Ideal bar feeders were on Aztalan’s shop floor, producing much-needed ventilator parts.

While Aztalan had a lot of help from other companies, many of the changes it has made are internal. “A lot of people in our company have been rock stars through the whole ordeal,” Mr. Kussman says.

Because some of the parts require secondary operations such as brazing, lapping and mechanical assembly, the shop has shifted machinists into assembly and added a weekend shift in the assembly department. Mr. Kussman says about a third of the company’s 75 employees are directly working on ventilator and anesthetic delivery parts, though with the additional support from shared resources like maintenance and programming, much more of the company is indirectly involved.

According to Mr. Kussman, staffing is Aztalan’s biggest challenge. The shop was overstaffed before the pandemic began as it was planning to start some new projects. However, because much of Aztalan’s work is essential medical supplies, it has not experienced a drop in work from its other customers. Because this is a temporary spike the shop expects to last through late 2020 or early 2021, it is currently looking for temporary employees to help fill the gap. Until then, Mr. Kussman says, “We just have to keep pushing.”

Aztalan has also implemented a number of measures to keep its employees safe and healthy. “We can't afford to have anyone get sick right now,” Mr. Kussman says. The company quickly adopted social distancing rules, which he says everyone respects. Other measures include washing down surfaces between shifts, shutting down common areas, asking employees to bring coolers from home instead of using refrigerators and adding an hour between shifts.

The shop was able to make all of these changes relatively quickly. “I would say we were able to ramp up in about four weeks,” Mr. Kussman estimates. “We've submitted all our sample parts and different things for approval. From programming and figuring out workholding and getting the right equipment, it's been only about a month.”