A theme we’ve been exploring in recent articles is automation, one of the major ongoing trends reshaping machining. Does the COVID-19 crisis make the case for even greater use of automation in manufacturing, particularly in CNC machine shops? 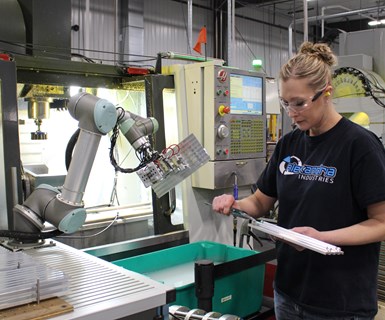 Automation is valuable in large part because skilled and knowledgeable personnel in manufacturing are so valuable. This photo from the article, “If at First You Don't Succeed, Automate Again” by Derek Korn.

That answer might be surprising. The reverse certainly sounds like it would be the case — the coronavirus made people challenging to employ, and automation offers a way to make parts without people close at hand. However, in manufacturing, the people were already in short supply. The case for automation had already been made. Plus, automation does not offer an alternative to the people who are really needed in manufacturing — that is, the ones with the skill and knowledge to program and troubleshoot systems and meet the complex developments to which automation cannot respond. For example, there is no automation I am aware of that could have executed a manufacturing facility’s pivot into ventilator parts production. Humans did that. The coronavirus and automation do not directly connect.

But the virus and automation do connect indirectly. Again, the case for automation had already been made. Manufacturing and machining were heading in the direction of greater use of automation and more capacity won through unattended production. The coronavirus crisis has been a disruption, but disruptions have a way of arraying choices along trend lines like this. In normal times, inertia keeps us stuck. Day to day, we keep with what we are doing and succeed the way we know how. But when disruption shakes the box, what was once stuck comes unglued. Things fall back into place not according to their old arrangements but according to the arrangements they really want to have. Manufacturers were already investing in more automated processes, and now, rethinking or recommitting to their production as they come out of this crisis, they will invest in it even more.

But what is automation? That question accounts for the breadth of much of our recent coverage because there is an array of answers. Say “automation,” and the first association coming to mind is a robot. Yet even this picture deserves re-examination, because robot technology and ideas for applying robots are advancing. Seemingly dedicated robots are being made more easily versatile, and collaborative robots, through integration with vision systems, are now able to fill complex roles. And then there are the options beyond grasping arms. For many shops, the right automation is a pallet system. For others, the right automation waits within the equipment they already have. Older, existing CNC machines can be differently equipped or differently arranged to carry out the needed production with less human intervention.

What is automation? That last point gets to the answer: not a means to replace people in manufacturing, which is impossible, but rather a means to multiply the output that people are able to achieve. Automation is about recognizing and realizing the value of people.

What the crisis really has made the case for is not automation, but people. In manufacturing facilities, we drew circles around people, trying to keep a 6-foot radius from one to the next. We saw how much we need people in the ways we struggled to do without them, and we discovered them to be so essential that we learned to make strange accommodations just to keep them with us.

Which brings me back to COVID-19. What the crisis really has made the case for is not automation, not directly, but people. We have just been through, and are still proceeding through, a planetwide exercise in valuing people. We isolated ourselves in many cases not to protect ourselves, but to protect people more vulnerable than ourselves from the virus’s spread. And in workplaces such as manufacturing facilities, we drew circles around people, trying to keep a 6-foot radius from one to the next. We saw how much we need people in the ways we struggled to do without them, and we discovered them to be so essential that we learned to make strange accommodations just to keep them with us. The lesson of the crisis: People are valuable.

If you see this the way I do, then you might also see that some of the most relevant and futuristic writing we have published is the work of a columnist who’s been with us for 25 years. This month, we say goodbye to retiring columnist Wayne Chaneski, posting the final installment of his column, “Competing Ideas.” For a quarter century, Wayne wrote about processes. However, in every column, what Wayne was really writing about is people. I’ll say it again: People are valuable! We know our machines are valuable (or at least they are costly), and so we equip them and maintain them — even automate them — to realize all of their value. But people are more valuable still, so we ought to encourage and help them, and we ought to build processes that get obstacles out of their way. Wayne saw this and helped us see it. Rereading Wayne’s columns has taught me lessons about clarity, communication, culture, forgiveness, people’s foibles, and taking care not to be too militant in practices such as lean. We have provided a free, downloadable collection of some of Wayne’s best columns over the years. Thank you, Wayne, for ideas that help us not just to compete, but to prosper.

One other goodbye: This month, we recognize Derek Korn’s departure from Modern Machine Shop. Derek has not changed employers, but he has changed roles. Formerly executive editor with MMS, Derek has gone to become the editor-in-chief of our sister publication Production Machining. Derek served as one of MMS’s greatest writers in no small part because of the affinity for machine shops and machining businesses he applied to his work. To every shop he visits, he brings a fine appreciation for both the engineering achievements and the cultural achievements that make individual shops great. Indeed, one of the fruits of Derek’s work for MMS over the years has been the development of our Top Shops program. Initially a benchmarking program, it expanded under his leadership to become a platform for showcasing exemplary shops, very much reflecting Derek’s own admiration for successful machining facilities and their teams. Production Machining is all about a particular community of shops — precision small parts producers — and that community will now benefit from Derek leading the media voice that champions their work.

His byline is and will remain all over this website, because this site shares some of the content available on PM — so he is not going far. But he is now at work in his new role, so let me take this opportunity to say: Derek, congratulations, best of luck and thank you.