Westminster Tool has shifted the workflow in its moldmaking department to incorporate high-speed five-axis and, as a result, cut lead times and reduce the need for wire EDM.
#casestudy 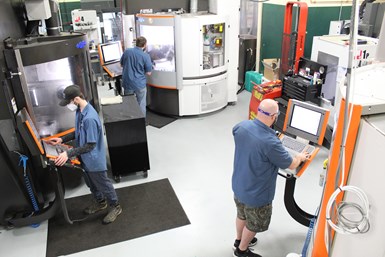 Westminster Tool of Plainfield, Connecticut, has spent the past seven years investing in its workforce, and the result is a pool of talent that has enabled the moldmaker to capitalize on its recent investment in high-speed machining centers. The new equipment has changed the way the company thinks about complex jobs and about how it can meet the increased demand from its mold department, which has seen new activity from the medical device industry. In total, Westminster Tool has added two high-speed three-axis milling machines and one high-speed five-axis milling machine with a pallet pool from Mikron Corp.

Until recently, Westminster Tool operated a single Mikron HSM 500. Even a 24/7 schedule for the machine could not solve the capacity bottleneck that required the company to turn down jobs. Westminster Tool reports that their decision to invest in additional machining centers was critical to maintaining their well-established training program.

Westminster Tool discovered that by increasing its use of five-axis machines to replace EDM operations, it could reduce its electrode list by 40% for a single job — cutting the job’s lead time by two weeks.

Now that it has added two more high-speed three-axis machines, a Mikron HSM 500 Graphite and a Mikron HSM 500, as well as a high-speed five-axis Mikron HSM 400U LP, the moldmaker can say “yes” to a higher quantity of jobs — including jobs that feature complex geometry. “The goal was originally to increase throughput by reducing our overall lead time,” says Ray Coombs, president of Westminster Tool. The decision to add more machinery was not driven by a single job, but by the desire to increase capacity. The new machinery ultimately increased the shop’s milling capacity by over 400%. 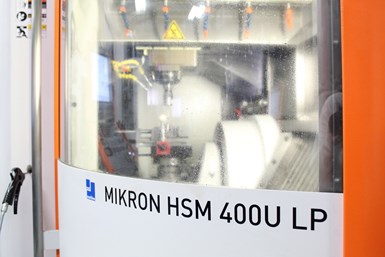 Mikron’s five-axis HSM 400U LP has enabled the shop to both perform more extensive training with its apprentices and take on jobs with more complex, intricate geometries. Photo Credit: Westminster Tool

When quoting jobs, five-axis has eliminated steps that Westminster Tool had previously performed with EDM — saving a significant amount of time. In one exercise, the shop discovered that by increasing its use of five-axis machines to replace EDM operations, it could reduce its electrode list by 40% for a single job — cutting the job’s lead time by two weeks. “The five-axis capabilities, for example, open us to more intricate types of jobs because we can now hit complex geometries and angles that were difficult to achieve before,” Coombs says.

This process of simplifying the flow of work and focusing on five-axis machining enabled Westminster Tool to redirect its EDM efforts to operations that specifically require EDM. In anticipation of a projected rise in aerospace jobs during 2021, Westminster Tool invested in an additional wire EDM machine, a Sodick ALN 400G.

An additional perk of adding the new spindles is the ability to increase the hours trainees can use the machines each week. With the new equipment, one apprentice in the hard milling department was able to reach a milestone in three weeks that previously would have taken twice that amount of time. The company also discovered that employees who had already worked through their training were well-equipped to start using the new machining centers right away — many were eager to log time on the new equipment and try out the expanded capabilities.