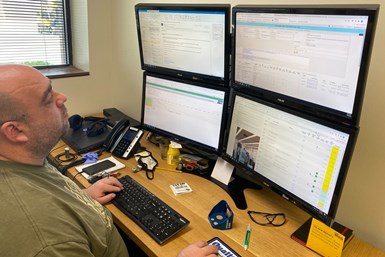 The ProShop DME consists of a suite of modules in ERP, QMS and MES that cover everything from scheduling to quote to cutting tool management. Team members can use dashboards and templates in the ERP module as soon as client RFQs arrive, allowing operations manager Matt Rodde to rapidly create detailed estimates and delegate responsibilities. When the job is won, the estimate routing details automatically become the basis of the part router.

Machine shop 3D Industries  has a “fanatical attention to detail.” So says operations manager Matt Rodde, who claims that it’s this attention as well as the precision CNC machine shop’s integrity when working with customers that keeps it running smoothly. That’s no small feat when the shop is equipped with two EDM machines; several three-, four- and five-axis CNC milling machines and lathes; Swiss turning machines; engraving and grinding machines; a CMM part inspection center; and dust and particulate collectors to maintain a controlled climate. Keeping track of the whole operation is the responsibility of all 17 employees in four departments plus a separate quality department. It’s imperative they are all on the same page.

An enterprise resource planning (ERP) software system was always a pillar of the Bensenville, Illinois, shop’s process, but the one in place wasn’t meeting the its needs. According to Rodde, everybody was bending over backwards to try and wrangle the enormity of detail. “The due diligence required to do so was beyond reasonable measure,” he says, going on to say that the tools available in the software could not manage the amount of information passing through the shop with “the care and concern that we needed.” 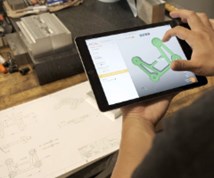 A job shop can descend into chaos when, operationally, few people are on the same page.

3D Industries President Matt Gawlik knew from experience that a job shop can descend into chaos when, operationally, few people are on the same page. To combat this, he introduced an initiative called Logos, believing the optimal way to combat chaos and turmoil is with logic. 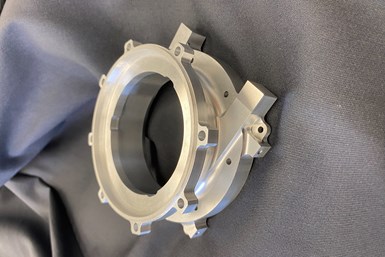 By using ProShop rather than its old paper-based system, 3D Industries reduced average setup time and inspection time for this rocket fuel pre-filter fitting by 30%.

“The inherent nature of a job shop is chaos and turmoil,” Gawlik says. “I call it a pirate ship. I ran a pirate ship for a long time and it’s fun and exciting, but it’s not scalable. We wanted to switch to a more organized, rule-based system.” This led Gawlik to seriously consider the concept of integrating a digital manufacturing ecosystem (DME) at 3D Industries.

The Benefits of Specialized Software

Gawlik﻿ heard of an ERP/DME software program that supposedly tailored to machine and tool shops, but he was skeptical. This new software was different though, and representatives including the software company’s co-founder Paul Van Metre visited 3D Industries onsite and conducted demos to educate employees on the system. 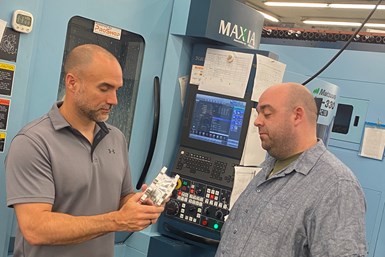 Matt Gawlik and Matt Rodde discuss the quality of a high-tolerance part fresh off one of the shop’s five-axis vertical machining centers. This part is meant for one of their space flight customers.

Gawlik and Rodde were sold on the fact that ProShop focused specifically on the needs of job shops (after all, it was originally developed as a complete ERP/QMS/MES system for Van Metre’s own shop). They implemented the web-based system in January 2017.

One of the first problems they tackled involved scheduling. “We were using our ERP software for quoting and inventory, and it worked okay, but we just couldn’t get the goods scheduling and reporting done effectively,” Gawlik explains. The former system’s design made it difficult for the team to gather critical data effectively and put it in the right “buckets” to generate reports they could actually use. “Scheduling and reporting are the keys to doing everything else right,” Gawlik says. With the majority of 3D Industries’ precision machining work going to customers in the aerospace, military, defense and outer space industries, correct reporting is crucial to meeting the plethora of specifications and regulations required by these customers. It’s also critical for business. “ProShop is like a box cake mix,” Gawlik says. “The main structural ingredients are already there for you, so if you follow the directions and add your specific job details, you’re automatically AS9100 compliant. The software sets you up for success.”

The ProShop DME consists of a suite of modules in three areas — ERP, QMS and MES — that cover everything from scheduling to quotes to cutting tool management, with most functions interconnected in the different modules. Team members can use dashboards and templates in the ERP module as soon as client requests for quote (RFQs) come in, allowing Rodde to create the part-making cost estimates. He then delegates responsibilities within each estimate. “Our employees have their own specific duties,” he explains. “We call them lanes, and we keep every car in its own lane. People are not overlapping each other or getting in each other’s way, and they can be accountable.” Organizationally, the software is meant to help keep everyone focused on their particular tasks.

Once Rodde creates the estimate and the customer purchase order comes through the DME system, the software automatically generates work orders and sends messages to the people who are working on that particular project. By the time a muster or kick-off meeting is called, only the people involved in that job are sitting around the table. “It’s eliminated a lot of potential error way up front,” Rodde points out. “It allows me to identify the lanes within the system so that people can see just what they need to see. It allows us to compartmentalize appropriately.”

The system reflects exactly what was discussed at the meeting and provides a visual representation of priorities and deadlines. “We’ve built queries for the guys who queue up only their CNC or EDM programming and their manufacturing operations for everything — from the first manufacturing operation they are responsible for to the last — and prioritized the operations in the order they need to happen,” Rodde says. The software even factors outside processes such as finishing or deburring into the operational steps while its MES modules keep parts, work orders, tooling, fixtures and gages organized and up to date. 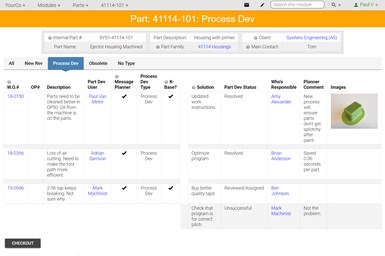 ProShop allows engineers and machinists to document and work through opportunities for improvement in their processes.

Employees can now keep tabs on their particular areas of expertise, saving time and costs in the long run. Further, the software’s internal messaging service has virtually eliminated internal email communication, instead receiving feedback through the automated system. This allows 3D Industries to address and solve problems more quickly because everyone is on the same page.

“Each week we go over an ‘issues list.’ When we switched to ProShop, we had all these nagging issues. Each person brought in five to seven issues per week, and we couldn’t get through them all,” Gawlik recalls, noting that the only issues the team deals with today involve growth. “We had no issues to address from the past, so it was like finally reaching the top of a mountain. We credit the DME and the cooperation of our staff to align with it. It sets everybody up for success by automating everything.”

“ProShop allows us to keep all the data visible and upfront so that everybody is on the same page. That’s how we are able to manage the complexity of what we do.”

3D Industries can now sort its massive quantity and diversity of manufacturing data into “palatable” pieces targeted to specific areas of the operation. Technical people review technical information, administrative people review administrative data and so on. “A practice that Matt Gawlik has put in place here is shining lights in all the corners,” Rodde says. “ProShop allows us to keep all the data visible and upfront so that everybody is on the same page. That’s how we are able to manage the complexity of what we do.”

Implementing the DME system has also provided 3D Industries with a clear snapshot of its tooling costs. “I did an analysis using a study released by Sandvik Coromant that detailed the reasons why tooling should account for no more than 3% of the costs going into your job. It was based on higher production environments than ours. At the time, we ended up being somewhere around the 28% range. Now, we’re down to an average of about 13%,” Rodde says, crediting the drop to his shop now knowing what tooling it has in the library, what equipment is used with which tools and why that tooling is used.

Gawlik and Rodde knew how to implement these various input strategies but they lacked the infrastructure to do it. “It’s brutally complicated, and the guys at ProShop already figured it out and built it,” Rodde says. “It was like we had the puzzle pieces and could probably figure out how to put them all together over time, but then ProShop came along and put all those pieces together for us brilliantly, correctly and quickly.”

Once they adopted the system, it took only one month to get everyone up and running at the basic level. “It changed the entire context of how we operated. It was a pivotal moment for our shop as a whole and allowed us to feel secure enough to make the transition,” Rodde says.

Although ProShop can coordinate with partner software and web-based programs such as Mastercam CAD/CAM software, Net-Inspect, Sage 50 accounting and Intuit QuickBooks, the 3D Industries team has been able to manage nearly everything in ProShop. For example, they have smoothly integrated HighQA Inspection Manager quality manufacturing software into the system, providing them with the ability to automate ballooning, dimensioning and what Rodde describes as other “painfully time-consuming data-entry work.”

Gawlik notes that he has become a more confident shop owner with the implementation of ProShop. “When you use a system like ProShop, you have data, so you remove opinion from a lot of areas,” he says. “You remove the ego, which is really the key. It gave me confidence as a business owner that I can create something scalable again, not just a pirate ship of a system.