Rotary broaches manufactured with a proprietary hardening process can cut material as hard as 50 HRC with minimal tool wear, improving the production process for medical screws and other components.

High-production CNC machining environments often rely on small process improvements to save a lot of money on a given job. The economies of scale simply mean that shaving a few seconds off a cycle will lead to shaving hours off the total time needed to machine all the parts. However, just as savings can add up in a high-production environment, so can costs. This is often a major hurdle in the production of medical-grade screws.

Rotary broaches – also known as wobble or hex broaches – need to be ground to fit each specific application, as the shape of the cutting tool needs to mirror the desired geometry of the hole. They are designed with a 1-degree offset along the longitudinal axis, which creates the “wobble” that enables the tool to cut hexagonal and square holes.

Medical screws can provide a challenge to manufacturers, as they join the scale of high-production jobs with the challenges of working with difficult materials. Using metals such as titanium and high-strength, low-nickel alloys like B﻿ioD﻿ur 108, medical screws often demand robust cutting tools in order to make any cuts at all, and even then tool life can suffer. When production volumes are high, the added tooling costs can rocket to tens of thousands of dollars per year, if not more. For screws requiring rotary broaching, the costs are especially prohibitive.

Rotary broaching, also known as wobble or hex broaching, is a machining process that puts square or hexagonal holes into parts using cutting tools with shapes that mirror the desired hole geometry. The tool’s longitudinal axis is offset from the workpiece’s﻿ axis by 1 degree, which creates the “wobble” as it spins. The wobble causes the broach to cut into the sides of a pilot hole as it is driven into the workpiece, creating the desired square and hexagonal holes. 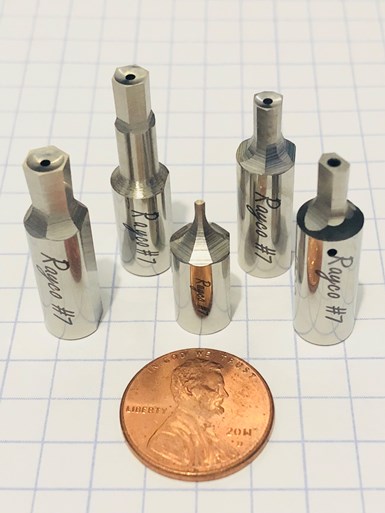 While rotary broaching is faster than other techniques for making square or hexagonal holes, such as EDM, a major limitation that shops often face is the hardness of the part. “A lot of people see 35 HRC as the upper limit of what a broach can tackle,” says Chris Rooney, owner and president of broach manufacturer  ToolsRayco. “And that usually comes with a short life for the cutting tool.” However, that’s not the case for users of Rayco Tools’ broaches, he notes.

The company hardens its broaches using a process that it has kept a trade secret for 70 years. According to Mr. Rooney, tools hardened using the Rayco method retain their edges and resist wear longer. On top of this, the broaches are vented to avoid wear from a vacuum effect during a machining cycle. Combined, these features are said to double or triple the tool life for users. “With a Rayco broach, you can broach hexes in 30-HRC parts with no significant wear on the cutter after 2,000 passes,” Mr. Rooney says.

Swiss Technologies of New England is a case in point. The job shop, which specializes in Swiss-type machining, has been dipping its toe into the medical field with housings and pump shafts, as the company felt that high-production medical components were a perfect fit for its specialties. When it landed a job making screws for a surgical robot, Applications Engineer Jeremy Messier remembered using broaches from Rayco Tools at a previous shop, and he fought to use them for the robot screws. 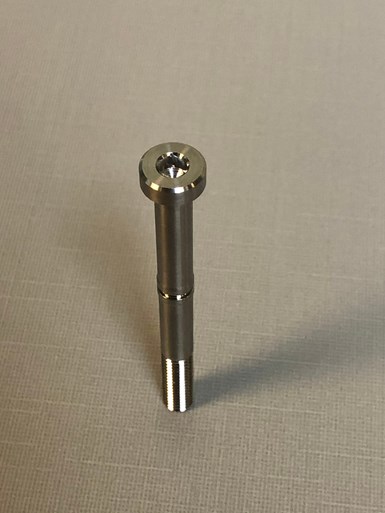 Swiss Technologies of New England manufactured screws for a medical robot using 40 HRC stainless steel. Not only could broaches from Rayco Tools cut the material, but the job used half the number of broaches that the company anticipated.

The screws for the robot are made of 17-4 stainless PH 900, a steel alloy that sits at 40 HRC on the Rockwell scale. For Mr. Messier, there were two reasons for using broaches from Rayco Tools. “When I call them up, I get immediate feedback on which tool to use to cut the material I need,” he says. “And most importantly, I knew Rayco’s broaches could cut the parts.”

The shop’s initial run of the screws proved to be a success. With a batch size of 1,000 parts, the shop was able to cut all of them with just two broaches. “I expected to have to use four or five,” Mr. Messier says. “But when we changed out the broach after 500 cycles, it was still pumping out good parts.”

That’s an impressive test run, but for a better look at how these broaches perform in a high-production environment, let’s look outside the medical industry.

Urschel Labs is an OEM that specializes in the production of precision size-reduction equipment for the food and pharmaceutical industries. In other words, the machines that slice, dice and crush foods and drugs for widespread consumption. Odds are, every reader of this magazine has eaten food processed using the company’s equipment. 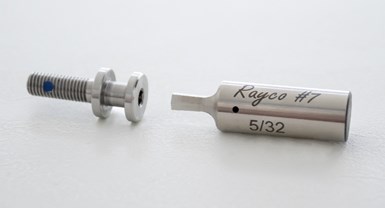 Urschel Labs uses broaches from Rayco Tools to manufacture the fasteners for its industrial equipment, as they have increased tool life by four times over the company’s old broaches.

Urschel runs its own foundry and shop to manufacture the parts used to make its machines. It even has an area dedicated to producing fasteners capable of enduring the stresses of its industrial products. The fasteners are made of 410, 416, 17-4 H900 and H1150 stainless alloys, in addition to other varieties. All of these have a hardness rating in the range of 27 to 32 HRC, with the exception of the H900, which stands at 44 to 47 HRC. The tolerance for the fasteners was set at approximately 0.001 inch.

According to Manufacturing Engineer Mike Stout, tooling costs were driving up overall production costs. “With our old broaches, we had to change them out every 700 to 800 parts for the 416 stainless fasteners, with 10 to 15 of those parts getting scrapped,” Mr. Stout says. With production runs of 22,000 pieces, that meant the company was going through 30 broaches and scrapping 300 to 450 parts every time it needed 416 stainless fasteners.

“In some materials, we’re getting five or six times the number of parts off of a single broach.”

With the broaches from Rayco Tools, Urschel saw immediate improvements. Rather than changing out every 700 to 800 parts, the new broaches can last through 2,600, scrapping none. That means in a batch of 22,000 fasteners, the company goes through only nine broaches instead of 30. In addition to the reduced cost of broaches and scrap, this saves time in tool changes and in identifying bad parts. 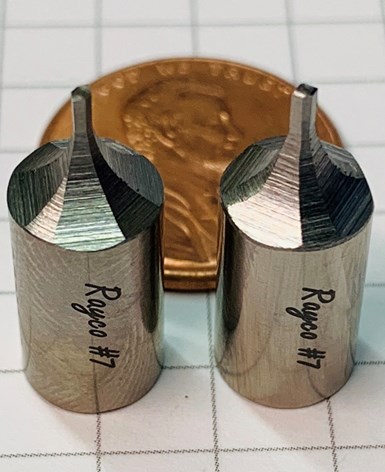 Rayco Tools designs each broach to the specific application. Rayco engineers evaluate both the desired geometry of the holes and the material that will be cut.

“They told us these broaches would triple our tool life,” Mr. Stout says. “It’s done more than that. In some materials, we’re getting five or six times the number of parts off of a single broach.”

Additionally, the company is looking forward to testing the broaches in 17-4 H900 steel. The material was simply too hard for the old broaches, but Mr. Stout anticipates success. “I think we will be able to get 200 parts out of the Rayco broaches,” he says. “That doesn’t sound like a lot, but 200 parts is a lot better than zero parts.” Mr. Rooney is confident his broaches will be up to the task. “We have already made cuts in 50-HRC metals,” he says. “We can handle 47 HRC.”

Additionally, the broaching operation Urschel Labs was performing required finishing passes. The chips from the old broaches were eating up the teeth of the clean-out drill, but Mr. Stout says the new broaches solved this problem, too. Their geometry makes finer chips, which reduces the wear for the finishing pass. Changing out one tool has essentially extended the life of two.