When this Indiana toolmaker saw an order for cutting tools to make ventilators for coronavirus patients, his workers started grinding before the customer officially hired them.
#covid-19

It’s not every day that the shopfloor workers decide to run a job before the owner has gotten the purchase order, but the coronavirus pandemic makes for interesting times. “My guys had started putting the job together before I finished filling out the quote,” says Mark Delaney, operations manager at Nicholas Precision Works (NPW), an Indiana toolmaking shop. “I just said, ‘Okay, I guess we’re making the parts whether we get paid or not.’”

Mr. Delaney has been a toolmaker since 1984, working for numerous companies for years before coming to NPW. In the past, he’s made cutting tools or stealth bombers and nuclear submarines. An old hat in the toolmaking world, Mr. Delaney feels his experience complements the programming skills of his younger employees. “We butt heads a lot,” he says. “Sometimes they’re right, and sometimes they’re just making more work for themselves.” The give-and-take between the different approaches helps the shop perform at its best, he says. However, in early April, he let his younger workers take the lead for a job. 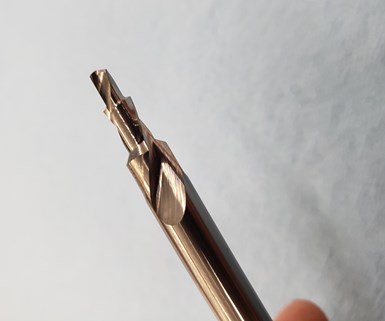 Nicholas Precision Works received an RFQ for this step drill, which was intended for manufacturing parts for ventilators intended for COVID-19 patients. Energized by the chance to help in the midst of a pandemic, the shopfloor workers got to work on the cutting tools before they had officially been hired, finishing the job hours after the purchase order came in.

When Mr. Delaney received a request for quote (RFQ) for step drills, he learned they were for manufacturing ventilators for COVID-19 patients. “When we saw the RFQ, the young guys on the floor got really excited,” Mr. Delaney says. “Everyone wants to do their part, and this was the perfect opportunity for them.” Programmer Ryan Alderfer asked to start work on the step drills immediately. “Who was I to say no after all the stupid stuff I’ve done?” Mr Delaney asks.

By the time the purchase order came in the next morning, Mr. Alderfer had programmed three machines, with two of them already running. All three machines were running in less than an hour, at a tighter tolerance than the job had called for. When the distributor — S&S Industrial Supply out of Potage, Michigan —  phoned to see if the shop could rush the order, Mr. Delaney let him know the step drills were already packed for shipping. “Ryan really took charge on this,” Mr. Delaney says. “I’m really proud of him.”

With schools closed, several of NPW’s employees had their children on site, learning remotely in a conference room. “I got to tell the kids that their parents were making tools that would help save lives,” Mr. Delaney says. “Really, we were just doing a toolmaker’s job, but it felt good to know we could help.”