“In season two, we’ll continue to explore how 3D printing is changing manufacturing through a brand new set of cool parts,” says one of the co-hosts. 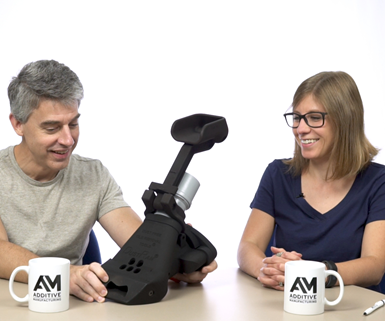 Additive Manufacturing Media will be premiering season two of The Cool Parts Show February 17. The YouTube series is all about the advance of 3D printing into industrial production. The series will continue to be hosted by Senior Editor Stephanie Hendrixson and Editor-in-Chief Peter Zelinski. Each episode explores the design, manufacture and potential impact of a specific 3D printed part with host discussion and expert commentary. Season 2 highlights production and proof-of-concept parts from the automotive, consumer, UAV, dental and research industries.

“We are grateful for the support and enthusiasm surrounding the first season of the show,” Ms. Hendrixson says. “In season two, we’ll continue to explore how 3D printing is changing manufacturing through a brand new set of cool parts. Viewers can expect the same accessible show format, but with a few new twists.”

Season two is being produced in partnership with season sponsor Carpenter Additive. Episodes will include segments in which Ms. Hendrixson and Mr. Zelinski tour various parts of Carpenter’s new Emerging Technology Center in Athens, Alabama.

“The partnership with Carpenter Additive has given us the chance to take The Cool Parts Show inside a new, modern, advanced manufacturing facility purpose-built for additive production — a facility that lets us show viewers different stages in the process such as HIPping and inspecting additive parts, but also offer a glimpse at the future of manufacturing facilities and the way that an increasing number of production parts will be made,” Mr. Zelinski says.

Episodes will post weekly to additivemanufacturing.media and the Additive Manufacturing YouTube channel. Complete show information is available at: gbm.media/coolparts.