Even identical twins do not have the same fingerprints. Digital twins are not identical, either, but manufacturers have so far lacked such a reliable tool for differentiating and tracking their virtual assets. This frustrating reality is changing with the unveiling of the universal unique identifier (UUID), which is essentially a digital “fingerprint” that keeps data associated with parts and even individual part features from design through quality control and beyond. 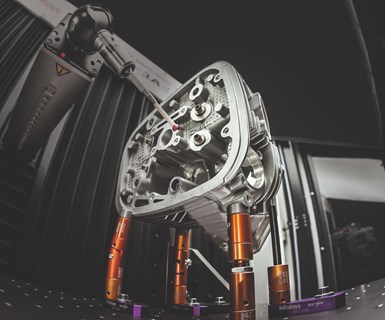 A broader article about the QIF, which provides a standard “language” for measuring instruments like this touch probe, analogizes the UUID to a social security number. Photo Credit: Mitutoyo America Corporation.

UUIDs are strings of numbers formatted according to the new Quality Information Framework (QIF). QIF aims to provide a common language for communicating quality data, similarly to how STEP AP242 streamlines design data exchange and how MTConnect streamlines production data exchange. Based in .XML formatting, these “languages” are also mutually intelligible with one another. Combine all three, as the International Standards Organization (ISO) proposes with its new ISO 23247 framework for leveraging digital twins, and data can flow unimpeded throughout all three phases of manufacturing.

The UUID provides a common reference for the three standards. Not unlike a barcode, the UUID binds physical assets to their associated data (which is embodied in the digital twin) throughout all three phases of product development. It is essentially the “thread” of the digital thread, which weaves a complete record of a product or process throughout its lifecycle.

One of Lockheed Martin’s ambitions for the digital thread is making fighter aircraft lighter. In a recent presentation on use cases for the new ISO standard, representatives from Lockheed, STEP standard developer STEP Tools and measurement technology developer Mitutoyo showed how.

Specifically, they described efforts to home in on the ideal sizes and weights for the various fasteners that hold aircraft together. The sheer volume of these seemingly insignificant components in a single wing, which in newer models like the F-35 consists of multiple material layers with different thicknesses at different points, can make a significant difference in weight. With every hole dimension replicated exactly in digital twins of all parts in the assembly, fasteners can be specified to a truly nominal length rather than a tolerance band that works for all, but inevitably leaves some oversized (and overweight).

Along with the UUIDs it specifies, the QIF makes such applications practical (and completes the necessary foundations for the new ISO framework). The QIF specifies a standard format for inspection data (STEP AP242), as well as a standard format for inspection reports from various suppliers. The UUID links the QIF quality control data to the STEP design data. It provides a persistent reference that eliminates potential confusion about not only which assembly came from which supplier, but also which measurement corresponds to which specific hole.

“We now have our framework. Now we observe, we collect, and we model, and from that, we learn.” – Martin Hardwick, president and CEO, Step Tools, Inc.

To demonstrate, a representative from Mitutoyo in Texas took caliper measurements of differing-thickness blocks that represented the multiple layers of a wing. As the audience watched via Web stream, results transmitted via Bluetooth to software that generated a QIF file (and UUID), which then transmitted to STEP Tools in New York. A common format for data and a separate UUID for every feature tolerance enabled quickly and easily recreating “as-built” models of the parts for comparison to the nominal CAD models.

The Lockheed application was not the only use case revealing the value of the UUID. Another presentation from Boeing described the challenges of replacing massive riveting machines with teams of smaller robots. A standard format for the data used to build the digital twin, complete with a UUID for every feature, can enable adjusting robot schedules according to the condition of an assembly when it arrives (for example, otherwise identical assemblies might require drilling holes and/or inserting fasteners in a different sequence). The third and final use case showcased how enriching MTConnect data streams with STEP-defined information, such as data on the actual parts and tools employed in the operation, can help determine when and how anomalies like feed-rate overrides will impact tolerances.

Readers can draw their own conclusions from the presentation, but it seems clear to me that these use cases portend a bright future for newly “fingerprinted” digital twins. Martin Hardwick, STEP Tools president and CEO and presentation moderator, pointed out that the possibilities may be even brighter when the intelligence that analyzes those twins is artificial. Machine learning algorithms learn from data – massive sets of data, ideally. Capability to take measurements and conduct other experiments virtually enables manufacturers to provide just that. “We now have our framework,” Mr. Hardwick said. “Now we observe, we collect, and we model, and from that, we learn.”