This new chemistry-based solution for five-sided machining allows for a diversity of metals and other workpiece materials to be used along with aggressive cutting forces.

These discs are key to the chemistry-based workholding described below. The biphasic polymer of the disc exerts adhesive force as it cools — about 1,000 N/cm2.

Solutions for workholding in milling processes have involved mechanical, electrical and pneumatic engineering. Workholding technology supplier Fresmak, based in the Basque Country of Spain, says it has developed a workholding system overcoming the limitations of all of these, and the discipline it relies on is chemistry.

Those limitations on other workholding types vary from method to method. Holding a part so that all of the faces except the underside are completely accessible for milling generally rules out mechanical clamping, which obstructs the part to some extent by holding it from the sides. Magnetic workholding is an alternative: A powerful magnet can hold the part entirely from underneath. But with a magnet, the range of materials is limited because the magnet ﻿can hold only ferrous parts. Another alternative, vacuum workholding, uses negative pressure to hold the part in much the same way. The limitation here is cutting force, because the hold of the vacuum is not as great as that of a magnet or a mechanical clamp. The F-Grip system requires a fixture that is heated and allowed to cool, activating and deactivating the adhesive.

Fresmak's “F-Grip” system, introduced at the most recent EMO exposition in Hannover, Germany, employs a two-phase polymer holding the part through chemical adhesion that can be activated and deactivated. The﻿ system can hold a broad range of materials at about 10 times the force of vacuum workholding, says company CEO Ramon Cenarruzabeitia.

The biphasic polymer exerts its adhesive effect as it cools. It is used in conjunction with a workholding fixture that is heated to between 175 and 300°F. (The fixture is designed to include heating elements.) The polymer itself comes in solid discs about 1 inch in diameter supplied by Fresmak. Each disc will exert about 5,500 N of holding force, so enough discs to hold the part are placed on the fixture and heated. Cooling then creates the adhesion between disc and fixture and disc and part. After machining, heating the fixture again to about 125﻿°F deactivates the adhesion, allowing the part to be removed. With the current F-Grip version, the heating/cooling cycle before and after machining takes approximately 1 hour, so alternating between at least two identical fixtures (one being in the machine tool while the other goes through its heat/cool cycle) is the way to use the system in continuous production. 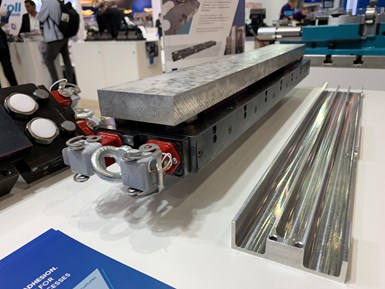 “On many aerospace parts, you have to mill away 80% of the material in one cycle," Mr. Cenarruzabeitia notes. The material is likely to be aluminum, and heavy cutting is necessary for completing the work productively. These two requirements together rule out both magnetics and vacuum. He sees the adhesive workholding as ideal for work such as this.

Indeed, the diversity of materials is not limited to metal. Workpieces made of glass, ceramics, foams and plastics, as well as workpieces built of fragile structures such as honeycombs, can all be held using the temperature-activated adhesive.

Fresmak researchers developed the two-phase polymer through about three years of work in partnership with researchers at the University of the Basque Country. That work continues, with the aim of making the adhesive stronger and the system quicker. As a company focused on machining and workholding, Mr. Cenarruzabeitia says, "We never imagined we would have chemists on staff."