Whether by automating on their own terms or joining a vetted network, manufacturers are responding to demand for easy online part ordering.
#datamatters

“We want to make ordering machined parts more like ordering a pizza.”

This is how Nick Pinkston, co-founder of Plethora, described the San Francisco CNC machine shop’s mission when I visited in 2017. To that end, the company had developed a system that invites customers to submit CAD files online for feedback on manufacturability, cost and delivery time. This visit was my first exposure to such a system, and I never could have guessed then just how quickly “pizza-order” parts purchasing would expand. Today, CNC machine shops have options for providing a similar customer experience without developing their own software, like Plethora and others have done.

One model involves becoming part of a community of shops that are vetted for work according to capabilities, capacity, location and other data. One example I covered in a previous column is Xometry. In addition to all the benefits of front office automation, this company provides a pipeline of work with little effort on the part of the shop beyond signing up and undergoing the vetting process. Among other benefits, such access could provide greater opportunity than might otherwise be available to diversify into different work amid a slowdown in any particular market. Shops might also have more opportunity to win work that might otherwise be inaccessible, such as jobs from large OEMs.

However, shops willing to eschew these benefits do not need a network to provide the “pizza ordering” experience. Just ask Paperless Parts, a developer of software for automating the task in-house. Some features of this system seem as focused on customer convenience as shop convenience. For example, a “smart RFQ” form with CAD upload can be placed on a shop’s own website, and shops can send “white-labeled” digital quotes (that is, with their own branding and terms). 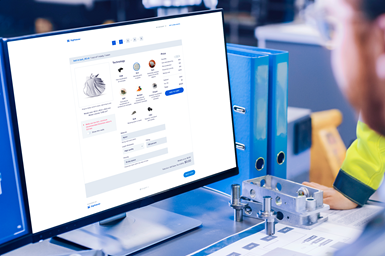 A newer company, Digifabster, is heavily marketing the advantages of white labeling. Initially focused on 3D printing, the company’s CAD analysis engine has since expanded to handle CNC machining operations as well. In fact, machining now accounts for more than a third of the company’s business, including an increasing prevalence of shops with both additive and CNC equipment. The subscription-based system appears as if it were homegrown, offering no evidence of an entity behind the automation beyond the manufacturer itself. “Driving customers to your own website is a major competitive advantage,” says Constantine Ivanov, founder and CEO.

Opportunity for machine shops to leverage both approaches at once might also expand as digital RFQ systems continue to gain in popularity. As I put the finishing touches on this article, I received a press release from Prototype Hubs. This company offers a hybrid model that includes both a marketplace for manufacturers to offer their services and, as of the release of that press release, a white-label tool to use for their own exposure.

The fact that the white-label tool is a recent addition is just one indicator of customer demand and expectations filtering into automation tools that are increasingly diverse and increasingly accessible. “We are seeing a shift in the way that customers source and order parts, and that is having a direct effect on how manufacturers are now trying to capture those orders from those customers,” Mitchell Eaton, Prototype Hubs CEO, wrote in an email.

A survey of more than 400 parts purchasers conducted by Paperless Parts supports these claims. According to this survey, 70 percent used a google or internet search to find new suppliers. Nearly 70 percent expect a quote in less than 24 hours, and only 6 percent reported willingness to wait longer than three days. Also notable is the fact that nearly half of prototype and production buyers always or often send RFQs to sourcing networks. Whether by joining such a marketplace or investing in the capability to compete with these marketplaces, shops with digital quoting and ordering are likely to stand out more as customer expectations change.