Additive manufacturing impacts every stage of production at this flexible yet highly automated CNC machining business.

“Anything that goes ‘boom,’” says Alan Soucy when asked to describe his company’s work. With customers including Lockheed Martin, General Atomics, Raytheon, Northrup Grumman and other large defense contractors, Advanced Precision Engineering (APE) is a very different manufacturer than the one Modern Machine Shop first covered in 1997. In addition to defense applications, the company’s then-specialty in semiconductor components provided a good foundation for transitioning into medical diagnostics equipment, prosthetics and communications assemblies, which can be no less challenging to manufacture than missile housings and firing controls. As Mr. Soucy puts it, “We don’t make brackets here.”

To maintain an edge with its largely West Coast customer base, this East Coast supplier has been investing millions of dollars annually in new equipment. The shop tour resulting in this story was too early to cover some of the latest examples, such as a 40-pallet system serving three of APE’s five-axis machining centers. Evidence of growth was plain to see nonetheless, including new HMCs, part-marking equipment and four collaborative robots capable of tending VMCs, live-tool lathes or any other machine tool not already fitted with a pallet changer. 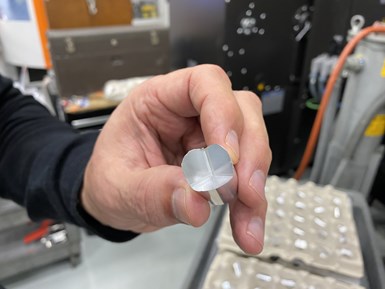 A closer look at the five-axis part for the fixture in the previous picture.

Despite all this new technology, conversations of any depth invariably returned to a less obvious development: the infiltration of additive manufacturing into every stage of the process. “It can be involved in everything you do in a machine shop,” Mr. Soucy says. “We keep finding new ways to use it.”

Tucked away in an office area, APE’s﻿ Markforged X7 3D printer was installed in 2016 to complement the cobots. On-demand, custom grippers that mirror the workpiece geometry expands the range of work suitable for robotic machine tending, Mr. Soucy says. Meanwhile, the cobots themselves break their own barriers to automation. Lacking the complex programming and installation procedures of their industrial cousins, these arms can be wheeled as-needed to any workstation as long as the part quantity is high enough and the cycle time is long enough.

Custom grippers made it practical to install four UR10 collaborative robots from Universal Robots, an implementation that has had wide-ranging implementations. “This allows us to take operators and train them as setup people, then train our setup people as programmers, and train our programmers as manufacturing engineers,” says APE President and CEO Alan Soucy.

Grippers are designed from part CAD files to mirror the clamped geometry, which at APE generally involves contoured surfaces that would stymie generic end-of-arm tooling. Turnaround time for new grippers is generally overnight. For minor alterations of existing designs — say, adding material to a weak point identified during prove-out or a previous part run — a few hours is usually sufficient. The printer also produces models of the parts to enable proving-out gripper sets and robot paths as quickly as possible. In many cases, all of this work is completed before the raw material for the actual parts ever arrives on the shop floor. 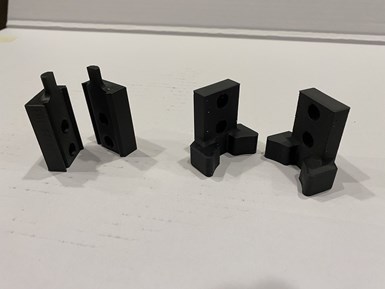 Laying Kevlar reinforcement material can be challenging for programmers.

The gripper material is a variety of carbon fiber impregnated with varying amounts of reinforcing Kevlar, depending on the weight of the part, says Dana Laing, manufacturing engineer, who works closely with the additive machine. Strong but not brittle, this supplementary material ensures parts can be held securely without the gripper snapping under pressure. Two nozzles print these parts layer-by-layer, one of which is dedicated to the overall structure and the other to the strengthening Kevlar fibers.

In addition to tuning basic settings, such as the part’s orientation on the bed or the printing density, programmers must path the Kevlar reinforcement material through the specified sections of the gripper structure, Mr. Laing says. This task can be challenging with thin structures that cannot accommodate the fixed-width fibers. 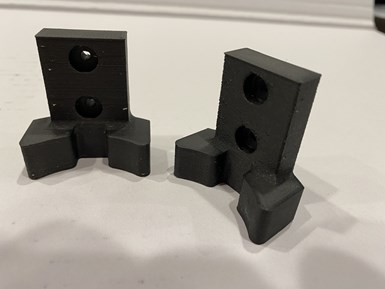 Common to every 3D-printed robot gripper at APE, the two holes interface with the robot arm. The rest of the geometry mirrors the part.

Other tuning might involve spacing the layers to resist certain forces (for instance, using a “sandwiching” effect to resist side flexing), or adjusting machine parameters such as build density or support structure geometry. Although literature and training from the machine’s manufacturer helped smooth the additive manufacturing learning curve, Mr. Soucy also credits the ingenuity of Mr. Laing and other members of his team (more on that below).

3D-printed replicas of new parts are always available for examination at the company’s regular, highly regimented process-planning meetings. During planning and quoting, this practice has been more beneficial than anyone could have imagined, Mr. Soucy says.

One of the most useful applications of additive is the one for which the earliest 3D printers were designed: prototyping. Models of new parts, like these, are always passed around during APE’s process-planning meetings.

Even with the most precise 3D CAD model, something as simple as part size can be easy to misjudge. “Sometimes, it’s like going out into a forest to choose a Christmas tree and thinking, ‘Oh yeah, this’ll fit,’ only to find that it’s much larger than anticipated,” he explains. “Or, you find yourself going, ‘Hey wait a minute, that’s a really small corner radius that’s really deep.’ Or, maybe you notice how a blended 3D surface comes right up to an edge and doesn’t give you the opportunity to use anything but a sharp-cornered end mill, which means more time surfacing.”

Experimentation with additive manufacturing also has led to a host of other new applications. Examples include:

Assembly aids are among the most useful applications of additive manufacturing at APE. This one is for inserting small inserts (helicoils) into threaded holes. Photo: APE

Given the complexity of APE’s work, CMM inspection would be more challenging without 3D printed grippers that mirror the part geometry. Photo: APE

These additive applications are only initial steps for APE, Mr. Soucy says. He hopes to begin printing machine fixtures as well. “When machines have 36,000-rpm spindles and move at 3,900 inches per minute, taking the weight out of the fixture puts less wear and tear on the machine axes,” Mr. Soucy says, referring specifically to the shop’s five-axis machining centers (Mikrons from GF Machining Solutions). “Another advantage would be if the operator is taking the fixture on and off the pallet to load another part. Removing unnecessary material on the fixture makes for a lighter fixture for the operator to handle.”

Making this happen will require technology that makes it easier to remove parts from the build plate without compromising flatness. Machining fixtures are not as forgiving as CMM fixtures, which generally exert less pressure. With APE’s current capability, 3D-printing fixtures would require machining surfaces smooth to ensure precise and secure part locating. Such work would occupy valuable capacity and defeat the purpose of 3D printing fixtures in the first place. Water-soluble supports are one possible solution the company is investigating, Mr. Soucy says. 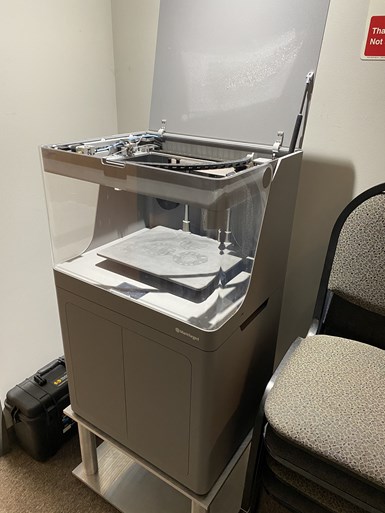 The 3D printer itself seems modest, but it’s impact has been significant to say the least.

Longer-term plans include an entire additive manufacturing lab, which will be equipped to build end-use parts not only in carbon fiber, but also in metal. Confidence in the future of additive is well-founded because the shop has the right kind of people to move in this direction, Mr. Soucy says. This, in turn, is a result of a deliberate shift in hiring more than just skilled machinists.

For instance, seven employees are degreed mechanical engineers. Two have additive manufacturing machines at home, and both have contributed significantly to APE’s advance into this technology. As long as their employer supplies the material, they are happy to print anything on their machines that does not require the higher-quality material or higher precision of the machine at the shop.

However, Mr. Soucy emphasizes that skills and smarts aren’t enough to get a job at APE. From deburring personnel to engineers, “We hire good hearts,” he said during an initial phone call about the prospect of telling another story about APE more than 20 years after the first MMS article. This was his first response when asked to detail the “change in philosophy” he cited as the biggest difference between now and then. Pride in the work is another important attribute in any new hire, as is emotional intelligence. “People who work here care about each other and take ownership of everything they do here at APE, and that’s really changed the company,” he says. “We spend eight to 10 hours a day with each other, and it makes it easier to come to work each day when you have people that have their team’s﻿ back.”

On-machine measurement capability can act as more than just a check on parts and setups. At APE, it is a check on people, too. 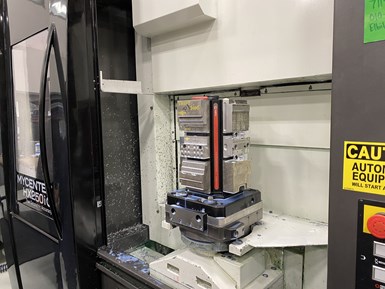 This is particularly true for those who work with the company’s eight Kitamura MyCenter HMCs, which handle more than 40% of the company’s production. In addition to durability (one recently replaced machine ran for 20 years without replacing any major components), APE has long prized these machines’ precision and, particularly, their speed. “They’re very fast for such big machines,” Mr. Soucy says, citing rapid traverse speeds of 2,300 ipm along the hand-scraped box ways of the latest models. Along with a user-friendly touchscreen control, he says such capability helps compete with manufacturers using similar horizontal machining strategies.

On-machine probing provides another way to press the advantage. In this case, using pallet-fed HMCs for lights-out production would not be as efficient without automating tasks like locating, referencing and measuring critical part features. At APE, the advantages of probing are particularly pronounced because work is complex enough to require performing these tasks mid-cycle. Given that the Kitamuras offer high-capacity ATCs (the newest models accommodate 200 tools), dedicating some stations to probes was an easy decision, he says.

However, he and the rest of APE’s leadership saw no reason to stop there. Some jobs require interrupting production not only for tasks like locating, but also for minor assembly, such as inserting screws into recently tapped holes. If a probe can check a part feature mid-cycle, why not make sure that the screw actually has been inserted? For that matter, why not ensure that clamps are in the right position before they’re machined away (or worse)? “Everybody picks up X and Y zeroes, but we also find it useful for making sure we don’t have a disaster on our hands,” Mr. Soucy says, adding that there is also a safety factor at work. “People can make mistakes, and the probes catch those mistakes. We don’t want any accidents.”